Travelling in the Regency Period

Travelling in the Regency Period

From the end of the 18th century mailcoach and stagecoach services developed rapidly as the pace of the economy quickened.  Between 1800 and 1830 traffic increased in speed and numbers beyond anything which had ever been known. Over one thousand vehicles left London every day.  A network of inns, ostlers, stables, postillions and blacksmiths supported travel throughout England and rivalry for passenger business became intense. 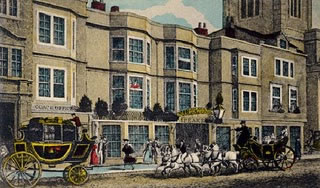 The mail coaches were the top order of vehicles on the road, and as the name suggests they were run primarily to transport mail, although they also carried passengers. They were so reliable that country towns set their clocks by their arrival. They made regular runs between London and most large towns, stopping at stages along the road to deliver their cargo, put down and collect passengers and to change horses.  Stagecoaches were a little slower but could still manage forty or fifty miles in a day.

The life of a coaching horse was not easy. Roads, though much improved over previous centuries, would often be filled with mud and ruts that made progress difficult. Tired horses had to be replaced about every ten miles and the average life of a horse pulling a coach at about eight miles per hour was only six years.

For passengers, too, travelling could be fraught. There were constant dangers on the road – accidents were not infrequent, roads were sometimes almost impassable and highwaymen could do a good trade on open and isolated stretches of countryside.  Travellers had to take sufficient funds with them for their journey since banks and their services as we know them today, did not exist.  Carrying sufficient cash was a necessity: hence the expression of ‘needing deep pockets.’