Smuggling Along the South Coast of England

Smuggling Along the South Coast of England

Smuggling was unknown until Edward I established a customs system. Up until that time, trade had been free. Edward was searching for money and since wool was the most important raw material produced in England (at least until the Industrial Revolution), he devised a duty on its export as a new source of revenue. In time the system was extended to other commodities such as imported wines and exported leather. A permanent staff of Customs officials was established to collect the duties, the coastline being divided into thirteen areas, each of which centred on an important harbour. The port of Chichester covered the whole of Sussex. Right from the start, efforts to evade paying duties were widespread. Merchants would take their ships into one of the smaller harbours where the risk of detection was slight. 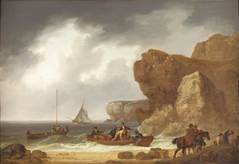 In 1614 the export of wool was completely forbidden and the ban remained in place until 1825. As a result ‘owling’ or smuggling of wool increased considerably, particularly along the coasts of Kent and Sussex, and since magistrates themselves were often bribed or involved in fraudulent dealings, few of the smugglers were ever punished. In fact, smuggling became just another profession!

The situation darkened during the Restoration when smuggling wool was made a felony punishable by death. But this severity did nothing to deter smugglers willing to risk their lives for a shilling a day, and owling assumed a more desperate character. The smugglers armed and organised themselves into large gangs. Romney Marsh was the focal point – the greatest part of illegally exported wool came from here – and the men of the marsh would buy wool many miles inland and take it to the coast by night in armed convoys. The owlers knew every creek of the marsh where wool could be loaded into ships, every inch of its treacherous surface and where dykes could and could not be easily crossed.

In response the government established a force of riding officers at the end of the seventeenth century. It was a land service designed to supplement the work of the customs sloops at sea. But it proved inadequate, the officers frequently so outnumbered that they were forced to watch wool carried off before their eyes. Smuggling of other goods also increased along with the duties levied on them. At first duties were placed on ale, beer and cider but later extended to tea, coffee, and chocolate. The amount of contraband tea, tobacco and spirits that were brought into England during this time was astonishing. Legally imported tea was extremely expensive, yet England fast became a country of tea drinkers. In this sense, the smuggler could be seen as a public benefactor supplying goods at rates which people could afford.

Because of the enormous cost of England’s continual involvement in overseas wars, duties remained high and despite ever more fearsome laws, their enforcement remained inadequate. Total lawlessness developed, particularly around Rye. Large gangs roamed the countryside, happy to attack any riding officer who crossed their path. The most formidable and notorious of all the eighteenth century gangs was the Hawkhurst Gang who terrorised Kent and Sussex. Its members did not hesitate to torture or murder anyone who opposed them. They were often seen in Rye itself. William Holloway, a nineteenth century historian, records the account of a Rye man born in 1740, who remembered the gang seated at the windows of the Mermaid Inn, carousing and smoking their pipes, with their loaded pistols lying on the table before them, no magistrate daring to interfere. 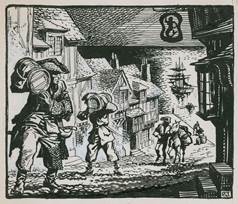 The key to eradicating smuggling was to remove the incentive and in 1784 Pitt cut the duty on tea so that it was no longer worthwhile to smuggle. Then came a reduction of duty on French wines and for the first time it seemed the government might gain control of the situation. Until that is the long wars with Napoleonic France, when duties rose to such an extent that smuggling inevitably revived. It was not until 1831 that the government got the upper hand. A Coastguard service, well armed and disciplined, was established and gradually broke the power of the armed gangs. The last serious smuggling affray was the The Battle of Pevensey Sluice in 1833.

It was not only the establishment of a metropolitan and provincial police force to keep law and order inland that led to the suppression of smuggling, nor the coastguards and customs officers who watched the beaches and the ports or the abolition of duties as part of a policy of Free Trade. The attitude of society itself changed. To Charles Lamb in 1823 the smuggler was the only honest thief who robbed nothing but the revenue – an abstraction I never greatly cared about. But as the country began to adopt a nonconformist Victorian conscience, the smuggler became instead a robber of the community.