Sea Bathing in the Regency Period

Sea Bathing in the Regency Period

In 1752 Dr Richard Russell wrote A Dissertation: Concerning the Use of Sea Water in Diseases of the Glands which argued that bathing in, and even drinking, iodine-rich sea water could cure glandular conditions.  The Prince of Wales on his second visit to Brighton followed the doctor’s advice and it wasn’t long before the fashionable crowd followed him to the town, a mere six hours from London by coach.  Brighton became the first choice for wealthy people seeking diversion and a cure for illnesses caused by rich food and lack of exercise.  A thriving industry devoted to bathing soon developed in the seaside resort.

Men and women had to enter the sea at specified times in different sections of the beach. The women used the beaches on the east side of town, while the men were diverted to beaches to the west.  This ensured that the sexes could not view each other in bathing costumes, or while swimming in the nude, a practice that the men followed often and the women less frequently.  As the popularity of sea-bathing grew, a new profession developed, with some of the town’s fishermen and their families turning to bathing visitors for a living.  Ladies were bathed by so-called ‘dippers’ and gentlemen by ‘bathers’; in both cases the customer was plunged vigorously into and out of the water by the bather or dipper.

To allow women to change privately into their bathing suits (a flannel gown), the bathing machine or bathing wagon was invented.  An extract from Smollett’s Humphrey Clinker (1771) gives a flavour of how these machines worked:  Betwixt the well and the harbour, the bathing machines are ranged along the beach, with all their proper utensils and attendants… Image to yourself, a small, snug, wooden chamber, fixed upon a wheel-carriage, having a door at each end, and on each side a little window above, a bench below. The bather, ascending into this apartment by wooden steps, shuts himself in, and begins to undress, while the attendant yokes a horse to the end next the sea, and draws the carriage forwards, till the surface of the water is on a level with the floor of the dressing-room, then he moves and fixes the horse to the other end. The person within, being stripped, opens the door to the sea-ward, where he finds the guide ready, and plunges headlong into the water. 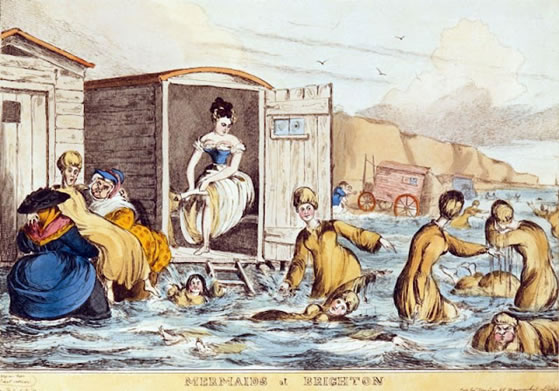 By 1790 there were about twenty dippers and bathers at Brighton and they continued in business until about the 1850s.  Many of the bathers were unable to swim so dippers were often figures of strength and assurance, inspiring great affection in their clients.  The most famous of the Brighton dippers was Martha Gunn, a large, sturdy woman, well-respected by the townsfolk and a great favourite of the Prince of Wales who granted her free access to his kitchens.  She dipped from around 1750 until she was forced to retire through ill health in 1814.

Martha died on 2 May 1815 and is buried by the south-eastern corner of St Nicholas Church; her portrait, painted in 1796 by John Russell, hangs in the tea-room of the Royal Pavilion and her house still stands at 36 East Street.