Gambling in the Regency Period

Gambling in the Regency Period

Gambling was endemic among the upper classes during the Regency period.  High stakes were common and a man could lose his entire estate while gambling.  Gambling debts had to be paid at once and failure to pay, at least in  aristocratic circles, was a serious dishonour.  Voluntary exile or even suicide was preferable.  A celebrated leader of society such as Beau Brummell was forced to flee to France when his gambling debts became too high.  Even a popular item of food came into being because of a man’s refusal to stop gambling.  The 4th Earl of Sandwich is said to have asked a servant to bring him sliced meat between two pieces of brfead so that he could continue playing and not leave the gambling table to eat. 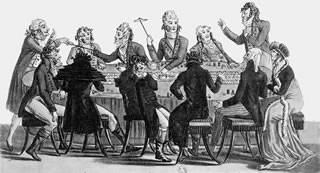 Gentlemen’s clubs in London – White’s, Brook’s, Boodles, Watier’s – were social and gambling establishments.  Watier’s was established in 1807 and named after its founder, Jean Baptiste Watier, the Prince Regent’s chef.   It was known for its excellent food but after Brummell and his friends joined, the club’s entertainment soon turned to gambling.  Fortunes were won and lost in a night’s play at the club which had a very short life, eventually disappearing in 1819.  One of the most popular games was faro, in which players bet on cards that were turned up from a spring-loaded device called a faro box.

Games of chance were not confined to gentlemen’s clubs.  Assembly rooms provided space for card playing for those who did not wish to dance and even Almack’s had its own small card room. And card games were played in nearly every home and were seen as a diversion to pass the time in a period when modern day entertainments were entirely unknown.  Even children had their own card games such as Pope Joan or Beggar My Neighbour.