Originally opened in 1765 as a gaming club, the tone and structure of Almack’s had changed radically by the Regency. In a period where social ranking was crucial, Almack’s served as a means of vetting those aspiring to high society. It was the curtain raiser for debutantes and became famous as an upper class marriage mart. The Assembly Rooms were open for gambling and supper but the primary activity was dancing. Almack’s balls allowed the ton to socialise and dance in a less formal setting than the private balls hosted in aristocratic homes. A light supper of bread, cakes, lemonade and tea was served at eleven pm and at that time the doors were closed for good. To discourage drunkenness, alcohol was not served at the balls.

By 1814, a committee of influential women from England’s most powerful families, known as the Lady Patronesses of Almack’s, controlled the operations of the establishment. The Lady Patronesses turned the club into the most exclusive social venue in England. Admittance to the Assembly Rooms was considered more important than a presentation at the royal court and any prospective member would have to face the Patronesses whose verdict could make or break them socially. 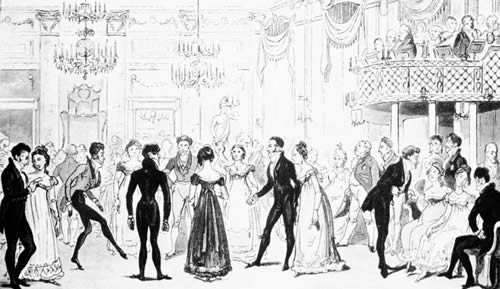 Receiving the approval of the Lady Patronesses was not always determined by a person’s aristocratic title or wealth. The Duke of Wellington was once famously turned away from the doors because he was guilty of the double solecism of arriving seven minutes late and wearing trousers rather than knee-breeches. People had to win the Patronesses’ approval and follow their rules to remain in good standing.

The members of the committee took it in turns to be the official Patroness of the club. In the height of the Regency period the ladies acting as Patroness were Lady Sarah Jersey, Lady Castlereigh, Lady Cowper, Lady Sefton, Princess Esterhazy and the Countess of Leiven. These women met every Monday night to pass judgment on who could and could not grace the rooms of Almack’s. Each person who received approval was allowed to purchase a non-transferable annual voucher for ten guineas. The vouchers entitled people to attend Almack’s weekly Wednesday night balls for the three month London Season (mid-April to mid-July), and while those who didn’t hold vouchers were not necessarily social outcasts, those who had their vouchers revoked were considered social pariahs, the revocation of the vouchers indicating a serious social transgression as defined by the Patronesses.

Members of Almack’s were permitted to bring a guest into the rooms, but only after that guest, too, had passed the scrutiny of the Patronesses. The members had to bring the guest in person to meet the Patroness who granted a ‘Stranger’s Ticket’ if she approved of the guest.

If a debutante was permitted to make her ‘coming out’ appearance at an Almack’s ball, her dancing partners were chosen for her by one of the Ladies of the committee. Dances were initially Scottish reels and English country dances but gradually other dances such as the quadrille were sanctioned. The waltz, the most daring of dances, made its way from Europe and was introduced around 1812.