The Venetians have been Italian citizens only since 1866 when the city joined the newly unified country of Italy, and they have remained very much a race in themselves. Despite periods of colonial expansion, Venice has always been a city state which has preserved a robust insularity and a particular Venetian character.

In many ways, Venice is a bourgeois city and its inhabitants homely and provincial. They are filled with local pride, certain that their city is the best in the world. Venetians are convinced that their way is the best way, but it’s a self-esteem that can make for narrow horizons. In the 1960s, many poor Venetians had never been to the mainland of Italy, and thousands had never even visited the outer islands of the lagoon. 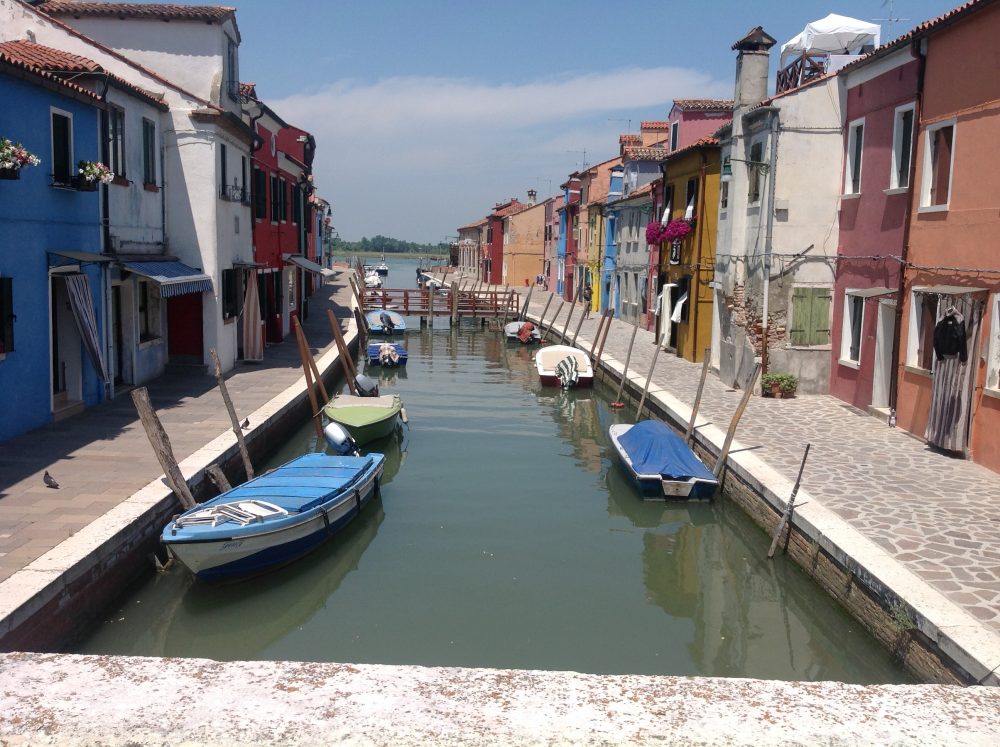 The island of Burano, famous for its lace work and brightly coloured houses.

Venetians have a language of their own, a rich dialect, which over the years has lost its impact because of cinema and television. The language has queer contractions and distortions which make the street signs of the city, often expressed in the vernacular, confusing.  The church of Santi Giovanni e Paolo is in the street signed as San Zanipolo. San Stae is really Sant’Eustacchio. San Stin is Santo Stefano.

Venice is a compact city, more a collection of villages, with each district having its own market square and a recognisable atmosphere. Even the dialect varies from quarter to quarter and the same street names appear over and over again in each section of the city. The six districts called sestiere are: Cannaregio, Dorsoduro, San Polo, San Marco, Santa Croce and Castello. 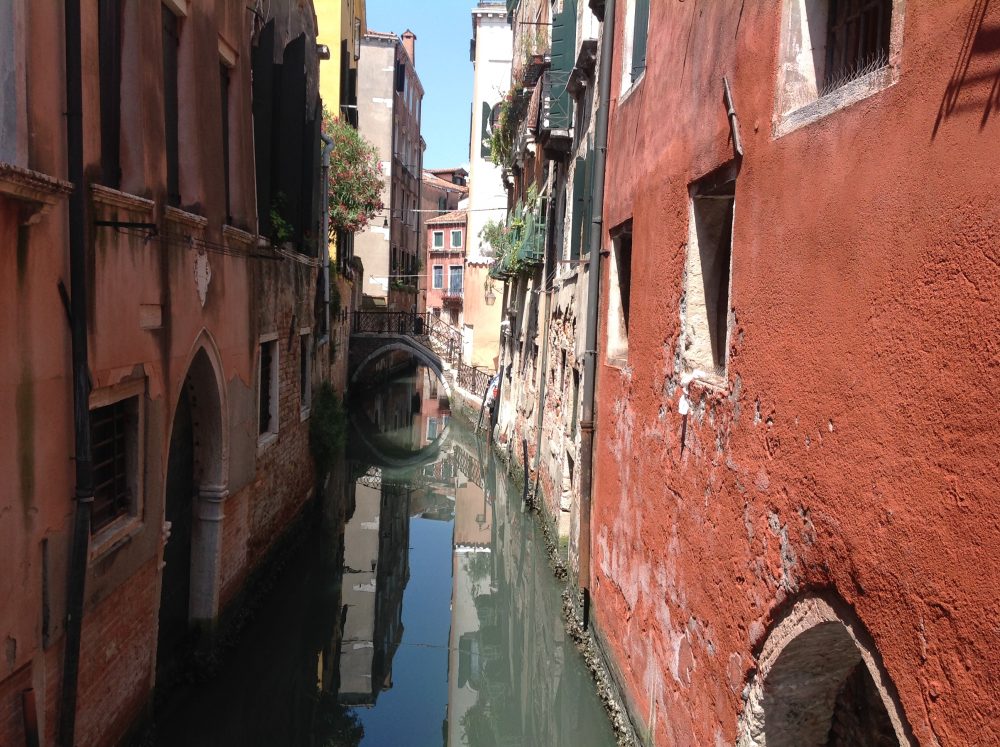 Castello— one of the six sestieres of Venice

Historically, the Venetian Republic supposed the worst in everyone, from the Doge downwards, and modern Venice is similarly cynical. Violent crime is rare—it’s a city of petty thieves. In the eighteenth century pick-pockets who took their haul to the city guards were allowed to keep a percentage of its value. Burglars are skilled at climbing through the windows of canal-side houses, stealing a handbag or necklace and drifting away in a silent boat. Big hotels have watchmen on the canals, private houses are heavily shuttered. The front doors of Venice are secured with a variety of locks, triple turn Yales, antique padlocks, bolts, chains and bars. For all the locked doors, though, Venice is a gossipy city where neighbours’ movements are observed and visitors analysed.

Much of the colour and richness of the city comes from the church:  wonderful buildings, processions and festivals, incense and organ music. Monks are ubiquitous, along with columns of nuns, whimpled in white. There are a huge number of churches in the city, yet only a fraction are in use today and the great religious festivals are often ill-attended. The summer services at the Basilica attract more tourists than Venetians, so it’s perhaps worth remembering that in her heyday, Venice was subservient to the Papacy only when she found it convenient. 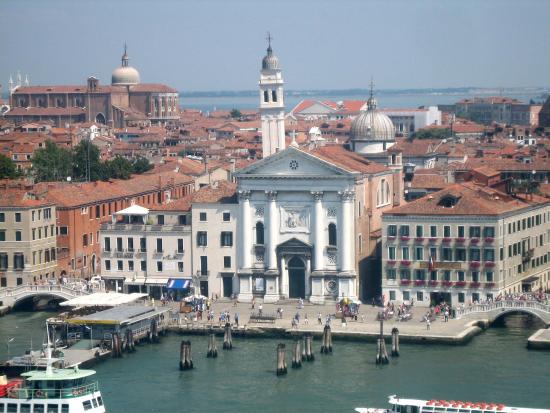 Santa Maria della Pietà , the Venetian church associated with Vivaldi, who was a priest and music teacher. The church now holds regular concerts of Vivaldi’s music.

East and West have always mingled in Venice—it’s said that the East begins in Venice—and practical tolerance of inhabitants has made it a cosmopolitan city. In its commercial prime, Venice was like a bazaar: Greeks, Jews, Armenians, Germans and the Turks all had their quarters, the Jews being the most resilient. They were originally forced to live on the island of Guidecca, then the Ghettos in the north-western part of the city on the site of a disused ironworks—ghetto is said to be medieval Venetian for a foundry.

There are market stalls that even today suggest a Middle Eastern bazaar. The outdoor market on Strada Nuova (on the way to the station) its canvas awnings flapping amid the clamour of high pitched voices, smells of fish, pepper and cloves. Venetians like to think of their city as a bridge between Occident and Orient. Their buildings are cluttered with Oriental treasures and the history of the city has been inextricably interwoven with the East since the first Venetians entered agreements with the Byzantine emperors. The great trade routes which kept Venice rich and powerful converged out of Turkestan and Persia, Afghanistan and Arabia on the seaports of the Levant where the Venetians maintained their own great warehouses.

Despite this affinity, when the Venetians spoke of pagans they usually meant Muslims and most strange foreigners were characterised as Moors. Yet they owed a great debt to Arab civilisation in the art of navigation and in architecture. Architects from both civilisations shared a common heritage of Byzantium, making St Mark’s and the Dome of the Rock distant cousins. 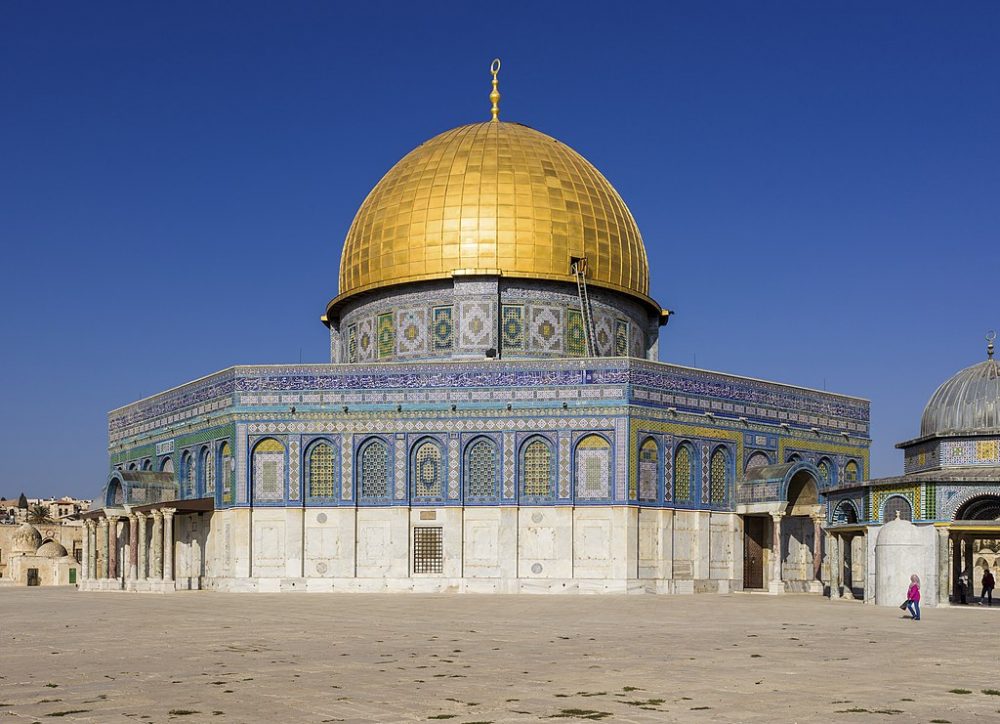 The Dome of the Rock, an Islamic shrine in the Old City of Jerusalem 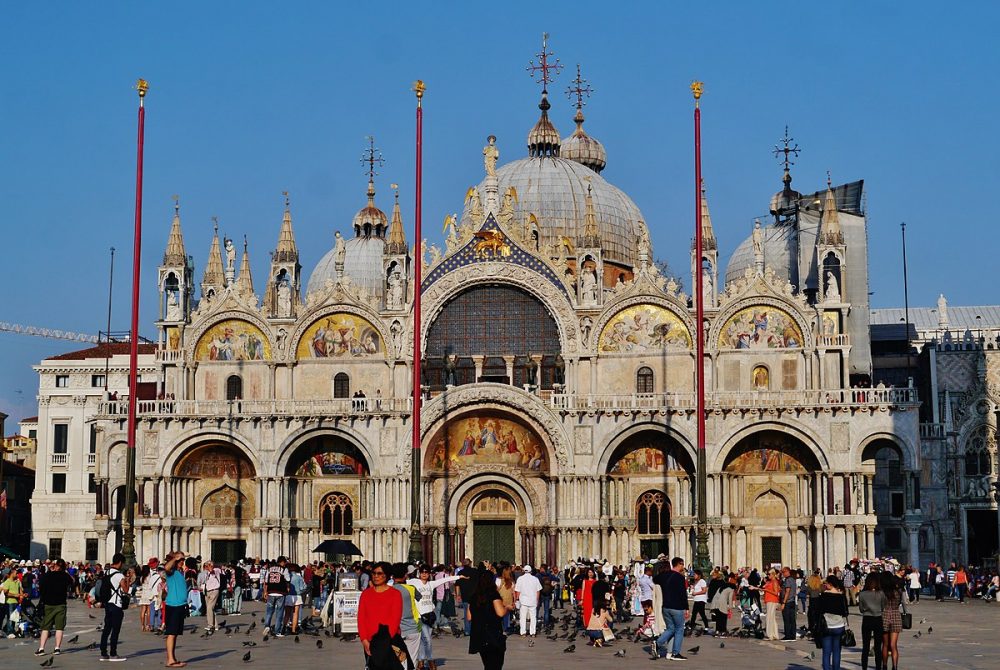 St Mark’s Basilica, the most famous of the city’s Catholic churches

Castello— one of the six sestieres of Venice