The Favelas of Rio de Janeiro

The Favelas of Rio de Janeiro

Immigration has shaped modern Brazil. From 1870 to 1930, between two and three million immigrants arrived in the country, most coming from Europe, but a significant number from the Middle East and Asia. The various ethnic groups—White, Black, European, Indian, and Asian—made Brazilian national identity more flexible than elsewhere in the Americas—though it was whiteness that was consistently prized.

That began with the first settlers. The Portuguese arrived in the early 16th century and brought with them colonisation and slavery as they established an economy based on sugar plantations. Initially they used indigenous labour to produce the sugar, but these enslaved people succumbed very quickly to European diseases, and over the next four centuries, Brazil imported around four million African slaves. The country maintained slavery longer than any other country in the Americas, abolishing it only in 1888. 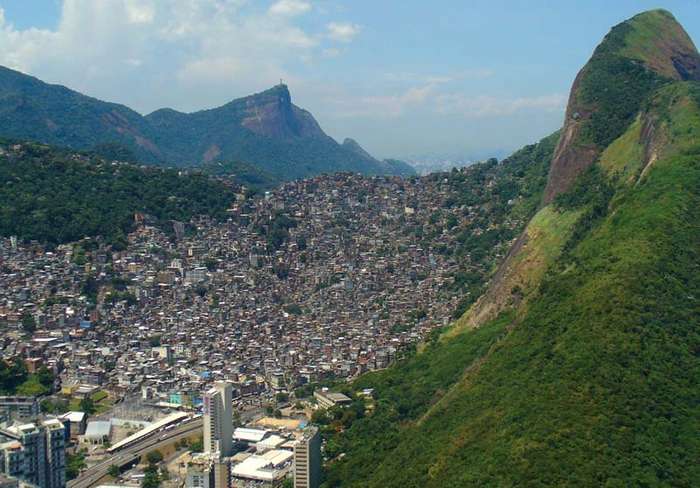 Favela on a hillside on the outskirts of Rio

The abolition of slavery and the proclamation of a Republic in the late 19th century resulted in a large number of  impoverished former slaves being pushed onto the streets, homeless and unemployed. The history of Rio’s favelas can be traced to this moment of transition. Newly freed slaves were forced to build temporary shelters  near to whatever work they could find.

Yet it was the great wave of migration from the countryside to the cities between the 1940s and the 1970s, that was primarily responsible for the proliferation of favelas. The city was highly segregated, with different areas for the well-to-do, the middle classes and the workers. The first group lived in the south of the city, the second in the north and low-income people in the suburbs. The only alternative left for the poor was to live far away in the periphery or in favelas on land that no one else wanted. By the 1950s, over twenty per cent of the city’s population lived in favelas. 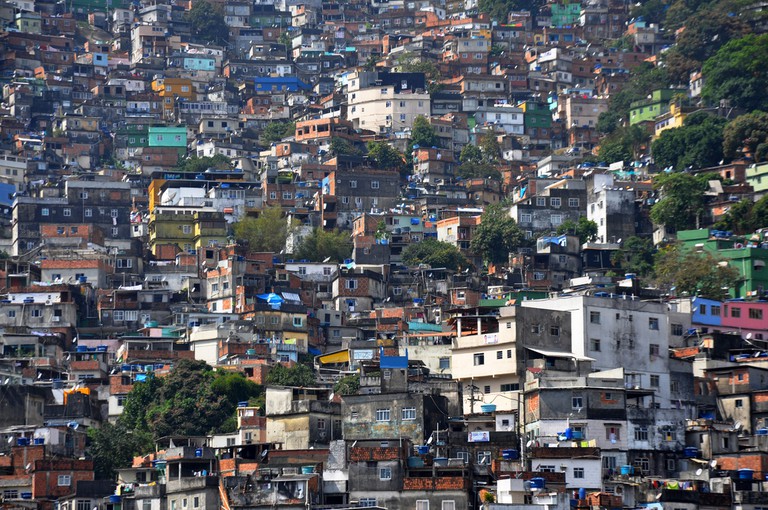 A general view of Rochina favela

Housing in favelas generally began with makeshift structures fashioned from wood scraps and daub, but over time more durable materials such as brick, cinder blocks, and sheet metal, were used. The lack of infrastructure, though, meant improvised and hazardous plumbing and electrical wiring. Often water had to be carried great distances and waste disposal was rudimentary. As a result of the crowding, unsanitary conditions, poor nutrition, and pollution, disease became rampant in the poorer favelas, and infant mortality rates were high.

Over the years, different governments attempted different approaches in dealing with what they saw as the favela problem—from programmes to eradicate them completely to efforts to provide or improve infrastructure and permanent housing. In the 1940s, an attempt was made to provide modern, sanitary, public housing units as an alternative to the slums thought to breed disease, illiteracy, and crime, but since the public housing was not properly maintained and the management style was unpopular with residents, the parks were abandoned within several years of their first occupation.

In contrast to providing alternative housing, the 1960s and 1970s saw an aggressive policy of favela eradication. By the time it was abandoned, the city’s housing problem had become even more acute and large numbers of Rio’s poorest citizens had been displaced and made even poorer. Ostensibly, getting rid of favelas was to reduce poverty, but many were located on precious inner city land in Rio’s most affluent neighbourhoods, making them fertile territory for lucrative commercial and residential construction. 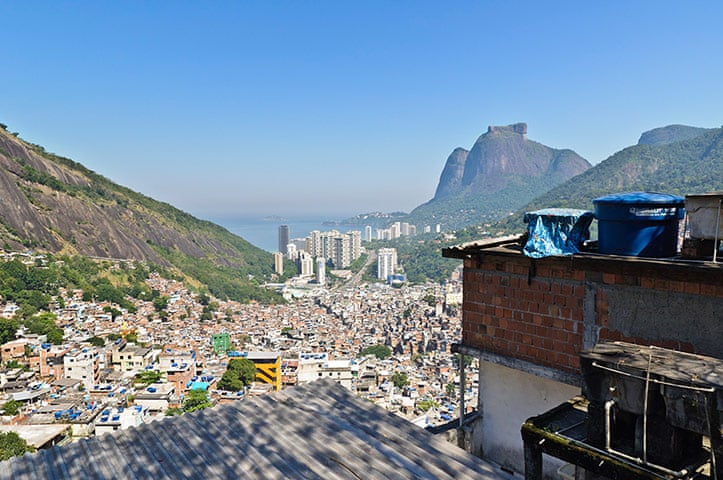 Rochina, the largest favella in Rio

Antônio Firmino of Sankofa Museum points to the wealthy neighbourhoods of Lagoa and Leblon in southern Rio de Janeiro. Freed black slaves used to live there. When they were kicked out, in the early twentieth century, many came here. But many people don’t know that.

‘Here’ is Rocinha, the largest of Rio de Janeiro’s more than 1,000 favelas and the most populous slum in South America, where Firmino lives. Rocinha is built on a steep hillside, surrounded by trees, overlooking Rio and about one kilometre from a nearby beach. Although Rocinha is officially classified as a neighbourhood, many still refer to it as a favela. It developed from a shanty town into an urbanized slum. Today, almost all the houses in Rocinha are made from concrete and brick. Some buildings are three and four stories tall and almost all houses have basic sanitation, plumbing and electricity. Compared to simple shanty towns or slums, Rocinha has a better developed infrastructure and hundreds of businesses such as banks, medicine stores, bus routes and schools. 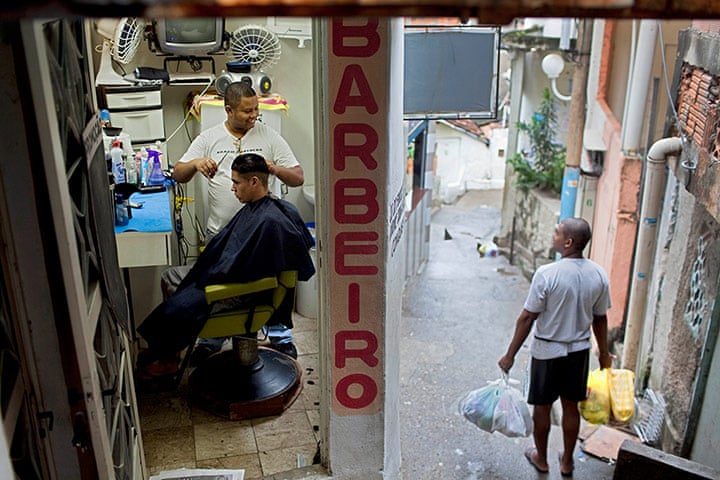 One of many favela shops and businesses

Rocinha’s history is rooted in oppression. Before the favela was born, the indigenous peoples that lived among the hills were wiped out by white settlers. Then, at the start of the twentieth century, the first houses popped up after a landowner illegally sold allotments to low-income workers – neglecting to build basic infrastructure to go with the new homes. Soon, many freed slaves were pushed out of more central areas of Rio de Janeiro and sought shelter in Rocinha. In the 1940s and 1950s, migrants arrived from Brazil’s northeast to find an established informal shelter.

This version of the favela’s history highlights how thousands of people were marginalised (the dominant version of Rochinha’s story blames poor residents for their living conditions) and how they had to fight for the few basic improvements that followed. In the early days there were no sanitation, no health-care and no schools,’ Firmino said. The first school, the Escola Francisco De Paula Brito, was built in the 1970s – decades after the favela was born. 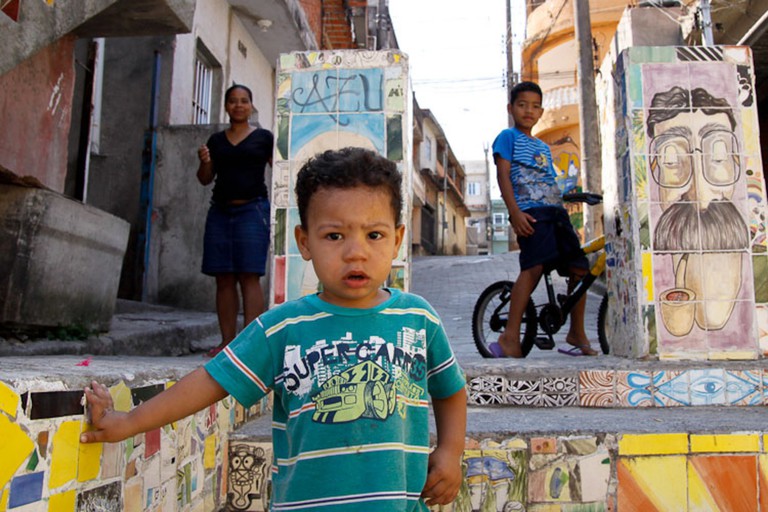 Children finding their own fun in favela

Although the 1950s through to the 1970s was a time of great strife for favela residents, there were positive developments in their struggle to obtain decent housing. Several communities were successful in resisting government attempts to remove them and although this brought no radical changes in government policy toward favelas—most were entirely neglected after eradication was abandoned—it represented a significant step in the favelados’  hard-fought battle to be recognized as the rightful residents of their chosen plots of land.

In addition, since the city and state governments failed to extend many public services to the favelas, community members, led by their local associations, banded together to provide sanitation, medical care, and transportation to their friends and neighbours. 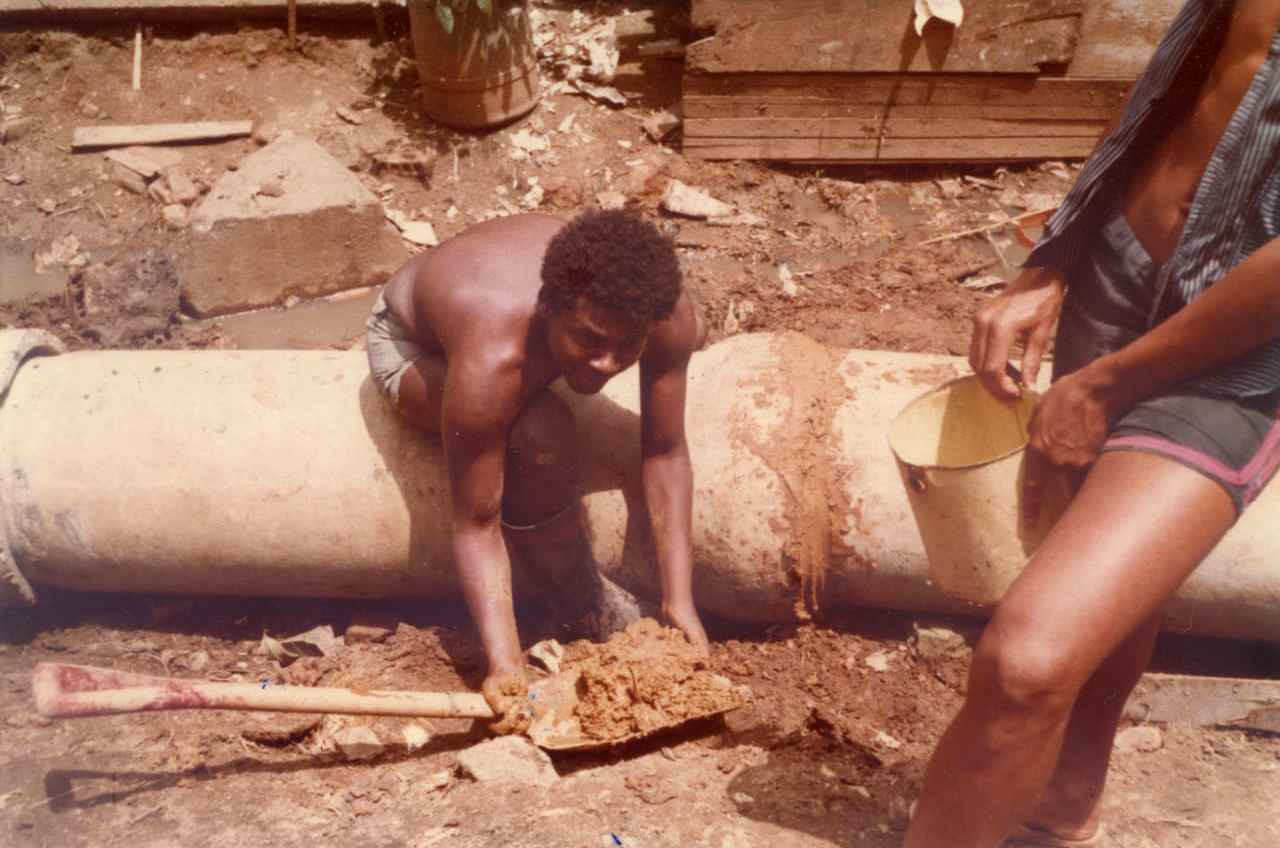 Today there are historical tours of Rocinha, during which its history is unfolded, highlighting the busy, peaceful and more surprising aspects of life in the favela – the shops, the wide variety of small businesses  that serve the needs of the community, the ecological park, the working class residents waking up at five in the morning to work in Rio’s wealthiest districts.

Knowing their history can make favela residents see how most of the improvements that occurred in Rocinha were achieved through political struggles, for example sanitation, bridges, schools.  Residents will see that nobody will give them anything – change won’t come from outside, Firmino has said.They’ll have to fight for it.

This article is based on the research I undertook for Rio Revenge , part of the Tremayne Mysteries series.