Early in the morning of 6 June, 1944, around 156,000 Allied soldiers stormed a handful of beaches along the coast of north-west France. Normandy had been selected as the landing site for Operation Neptune, the assault phase of the Allied invasion, as it offered the best access to France’s interior.

The landings were a desperate undertaking as Jos Kerrigan and his comrades in The Secret of Summerhayes know only too well. Amphibious operations against a strongly defended enemy inevitably lead to heavy casualties and German forces had occupied France since the summer of 1940. They had utilised large numbers of forced labourers to construct massive concrete fortifications at key points along the entire French coast, part of what became known as the Atlantic Wall. 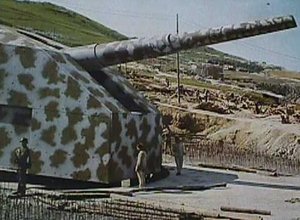 The assault began shortly after midnight on 6 June with a naval and aerial bombardment of German shoreline defences, together with waves of aircraft and gliders delivering paratroopers into the Norman countryside to secure key bridges and crossroads on the flanks of the landing zone. The invasion had originally been scheduled for 5 June but postponed for a day by bad weather. Towards dawn an armada of more than 6,900 ships approached the French coastline, the largest seaborne invasion in history. The task of transporting men and vehicles across one hundred miles of the English Channel to face a heavily fortified coastline was enormous and hazardous. Aboard a landing craft

Normandy, as the location for invasion, had remained a heavily guarded secret with even the units conducting the initial assaults not knowing where they were landing. Surprise was crucial since Germany had fifty-five divisions in France, while the Allies could transport no more than eight divisions on D-Day morning. Low tides and bad weather combined with Allied deception plans to convince the Germans that an attack was unlikely at that time. Rommel, commanding German defences in France, had left for Germany the previous day to celebrate his wife’s birthday. Jos Kerrigan in The Secret of Summerhayes takes great pleasure in relating this costly mistake on the German general’s part.

The confused German reaction aided early Allied success. It was not until 6 am when Normandy’s defenders saw the horizon obscured by an unbroken line of Allied ships that all doubt was removed that a large scale attack was in progress. At 6.30 am US soldiers went ashore by landing craft at Utah and Omaha beaches. An hour later British and Canadian troops arrived on the beaches of Gold, Juno and Sword.

The five beaches of the Normandy landings: Utah, Omaha, Gold, Juno and Sword

Less than fifteen per cent of Allied forces had seen combat before and the first waves of landing craft were packed with anxious and often sea-sick soldiers. Earlier Allied air strikes had been hindered by clouds and enemy positions were still largely intact. On all the beaches soldiers faced resistance as they came ashore, dodging bullets while wading through chest-high seas, but none of the landings were as severe as on Omaha Beach, where US forces were cut down as they struggled first to cross the wide sands and then to scale high bluffs overlooking the beach. As their landing craft ramps were lowered, German defenders pummelled the US troops with gun fire and shells from cliff-top bunkers. Those who made it ashore found it impossible to advance across two hundred metres of open beach. Eventually a small group of American infantry worked their way around the German defences, outflanking them and allowing the beachhead to be secured. But there were more than two thousand American casualties. Juno beach, Bernieres-sur-Mer. In 2008, a plaque identifies this house as the first to be liberated in France.

By the end of 6 June the soldiers had penetrated six kilometres inland and their foothold in Normandy was secure. At 6 pm, when Churchill addressed the House of Commons, it was to announce the astounding success of an operation that would go down as a military legend. But the cost on both sides was high. Total Allied deaths on D-Day were more than 4,000; thousands of Germans were also killed and captured (estimated at between 4,000 and 9,000) and up to 20,000 French civilians were killed or fled their homes to escape the bullets and bombs that rained down on their seaside villages. 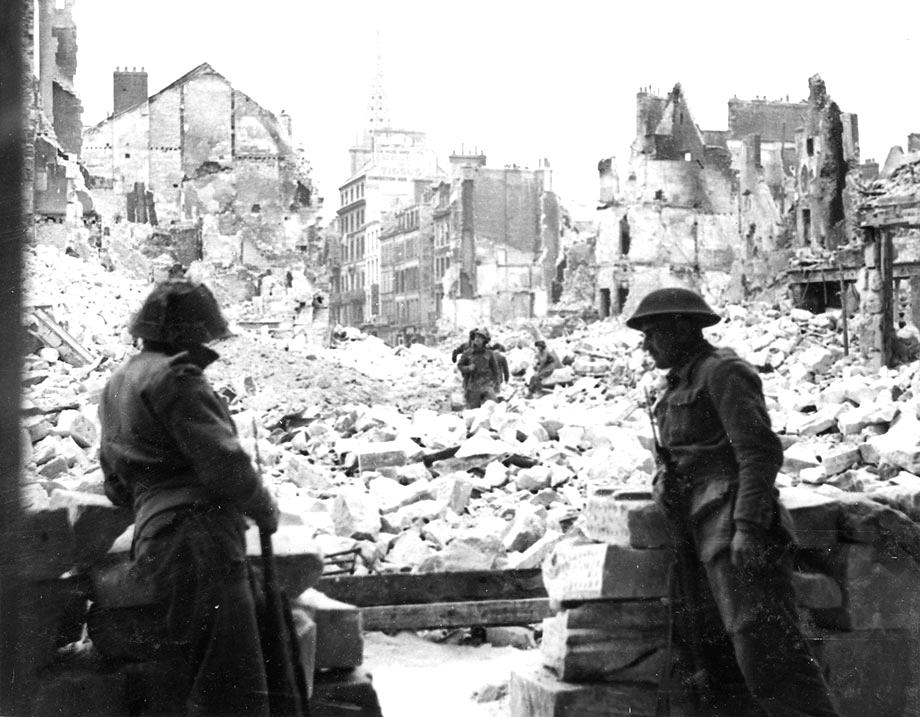 Although casualties were heavy, they were lower than estimates had forecast, one of the reasons being the D-Day planning for treating the injured. Medical personnel were brought into the combat area within a few days and casualty clearing stations, though often crude and makeshift, set up in large canvas tents. The development of antibiotics was key and penicillin was used extensively for soldiers who had undergone amputation and other major operations or had extensive wounds. It was estimated that penicillin saved up to fifteen per cent of lives, and the necessity of using it in wartime forced it into mainstream medicine. A Military Field Hospital in Normandy

Although none of the assault forces secured their objectives by the end of that first day of battle, D-Day was a turning point in the Second World War. Operation Overlord, the code name for the invasion at large, continued until Allied forces crossed the River Seine on 19 August and Paris was liberated. The success of the Normandy landings paved the way for the liberation of Europe, and though Berlin lay ahead, over five years of war were soon to come to an end on 8 May, 1945 – VE Day. The farmhouse at Bernieres-sur-mer today

Five years before he died, General Eisenhower returned to Northern France, the first and only time he made the journey after the war. Looking over Omaha Beach, he spoke from his heart:

. . . these men came here – British and our allies, and Americans – to storm these beaches for one purpose only, not to gain anything for ourselves, not to fulfill any ambitions that America had for conquest, but just to preserve freedom. . . . Many thousands of men have died for such ideals as these. . . but these young boys. . . were cut off in their prime. . . I devoutly hope that we will never again have to see such scenes as these. I think and hope, and pray, that humanity will have learned. . . we must find some way . . . to gain an eternal peace for this world. (Eisenhower: A Soldier’s Life, by Carlo D’Este, p. 705.)