The Boats of Venice

The Boats of Venice

As everyone knows, Venice is a city built on water and within its city limits there is every kind of boat for every kind of purpose.

The sàndolo is a smaller boat than the gondola with one oarsman facing forwards. It is one of the most common boats in the lagoon—its name appears to be from the Latin word sandalium or rather sandal, because of its form. The sàndolo has a flat bottom adapted for the low sea floor and varies in length from five to ten metres. Traditionally, it was used for fishing, but nowadays its primary use is as a means of transport. 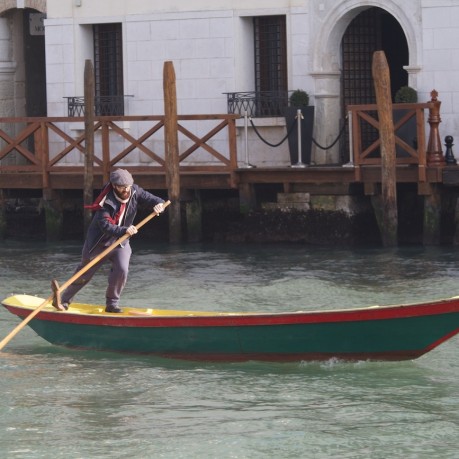 The nippiest way to get around the city!

The vaporetto is often used to mean any kind of water bus, but officially, the term refers to flat-decked, single-level vessels such as the boats on the line running from the Grand Canal to Lido and those from the Grand Canal to the Giudecca Canal. They take to the water in most weathers, plunging into the lagoon through wind, rain and sleet.The average capacity of a vaporetto is 230 passengers, but they a run at a loss – in winter only a third of the seats are occupied and the fares are artificially low. Frequent, fast and reasonably comfortable, they are the lifeline for many Venetians, enabling them to travel cheaply around their city. 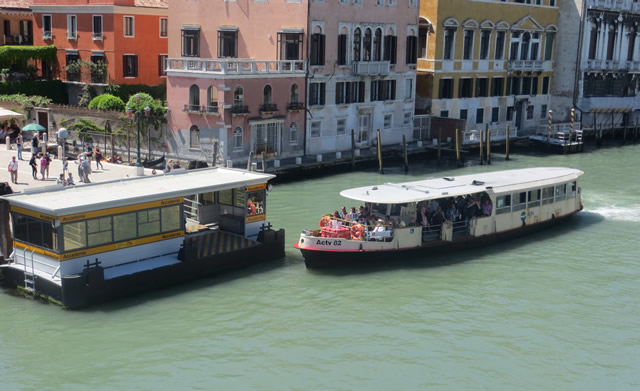 A vaporetto pulling into the landing stage

A traghetto which means “ferry” in Italian is a passenger boat that crosses the Grand Canal at seven points between the railway station and St.Mark’s basin. The boat carries up to ten passengers (compared to five for a privately-hired gondola) and eschews bow decoration, brocaded chairs, and other luxury trimmings. Rowed by two oarsmen, one stands behind the passengers like a traditional gondolier, the other closer to the bow. Most traghetti have been operated by the same families for generations and, as recently as the 1950s, there were some thirty of these gondola ferry routes rather than the seven today. 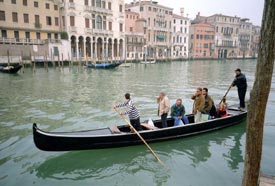 A traghetto on the Grand Canal

The gondola is said to have originated in Turkey but it has adapted itself to the nature of the city. It is high-prowed, lop-sided, brass-embellished and has been painted black since ordained by the sumptuary laws in the sixteenth century. The gondola is the primary symbol of Venice and is built only in its boatyards. The interior is thickly carpeted, with cushioned seats, but it is immensely strong and can be fast.

It’s constructed to be deliberately lop-sided to counter the weight of the one-oared rower at the stern.  At the prow is a ferro, a steel device with six prongs facing forwards and one prong astern. The gondoliers believe the six forward prongs represent the six districts of Venice, but disagree about the rest. Gondolas riding side by side through the lamplight of the Grand Canal, their ferros rampant, encapsulate the feel of Venice.

Gondolas are very expensive to build and every three weeks or so in summer they must go back to the yards to be scraped of weeds and tarred again. The fares are high, since the gondoliers are more or less unemployed in the winter. The gondola is not easy to row and the gondolier is a skilled boatman, his feet placed in a ballet-like position, toes well out, and the oar raised to waist level. Around sharp corners, his body twists in the opposite direction as he spins the gondola with a swing and a swish. The reverse stroke of the oar is as difficult as the forward because the blade must be kept below water to keep the bows straight with an instant movement of the oar in and out of the complicated row-lock. Gondoliers are showmen, bringing their boats to the landing stage with a flamboyant flourish, whipping their oars neatly out of the row-locks to act as brakes, and coming alongside with a surge of water. 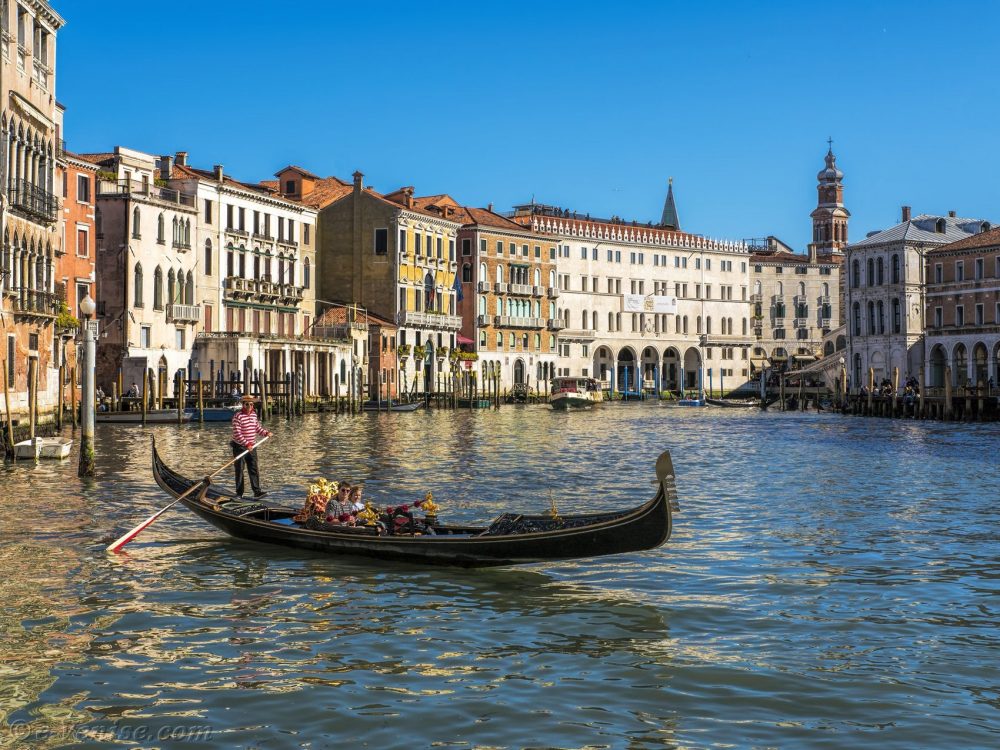 Visitors on the Grand Canal

The article was part of research I carried out when writing Venetian Vendetta.