On the afternoon of 4 August, 1914, Prime Minister Asquith made a statement to the House of Commons that would change millions of British lives: Germany had not agreed to Belgian neutrality and Britain had sent an ultimatum that expired at midnight. The shock of the news reverberated around the country. People had realised that war could be imminent, but so far nothing irrevocable had happened and they had continued to hope for peace. The rush of events was almost too much to take in. Joshua Summer in The Buttonmaker’s Daughter is alone in anticipating the trouble ahead. He understands immediately the significance of Archduke Franz Ferdinand’s murder in Sarajevo.

It soon became clear that the professional British army was inadequate for the war ahead. It was badly equipped and minuscule in comparison to the conscript-heavy standing armies on the Continent. On August 5, Kitchener was appointed Secretary of State for War and immediately warned the government that the war would be decided by the last million men that Britain could throw into battle. He decided to raise a new army of volunteers to increase Army strength by 500,000 men. It had to be an army of volunteers as British hostility to the idea of conscription was deeply ingrained, making it politically unpalatable. Days later Kitchener issued his first call to arms for 100,000 volunteers, aged between 19 and 30, at least 1.6m (5’3″) tall and with a chest size greater than 86cm (34 inches). Three weeks later, another 100,000 were called for and the age limit raised to 35. The most famous Kitchener poster appeared on 5 September. 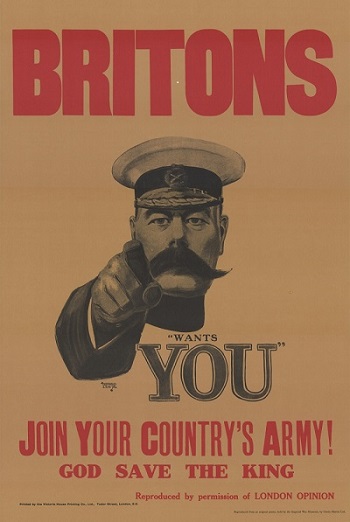 Probably the most famous recruitment poster ever

The call to arms was augmented by the decision to form the units that became known as Pals Battalions. Men often went to the recruiting office with their friends and ended up in the same group or battalion of the army, and General Henry Rawlinson suggested that men would be more willing to join up if they could serve with people they already knew. They would look after each other and keep each others’ spirits up during the hard times. Lord Derby was the first to test the idea when he announced in late August that he would try to raise a battalion in Liverpool, comprised solely of local men. Within days, Liverpool had enlisted enough men to form four battalions. 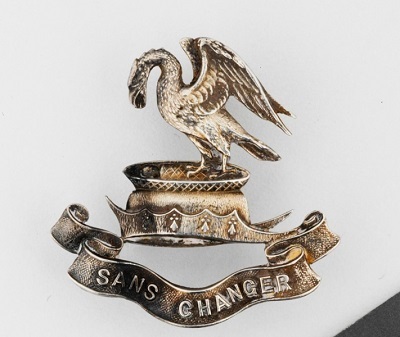 This headdress badge was given as a personal gift from Lord Derby to men who volunteered for the first four City Pals Battalions of the King’s (Liverpool) Regiment before 16 October, 1914.

Soon groups of men from the same workplaces, villages, churches, and even football teams were joining the army together. On 21 August, 1914, for example, a Pals Battalion began to be raised from the stockbrokers of the City of London and in a matter of days 1,600 men had joined what became the 10th Battalion, Royal Fusiliers. 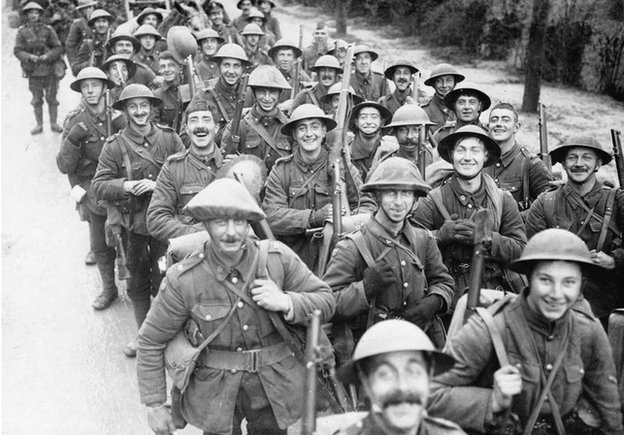 The 10th Battalion, the Royal Fusiliers, known as the ‘Stockbrokers’ Battalion’, smiling as they march to the trenches

By the end of September, 1914, over fifty towns had formed Pals Battalions. They were a uniquely British phenomenon since Britain was the only major power not to begin the First World War with a mass conscripted army. Pals Battalions were most often linked with the towns of northern Britain.

In September, 1914, Colonel Claude Lowther, the owner of Herstmonceux castle, raised a battalion of local men. He set up recruitment offices all over the county, but principally in the seaside towns of Hastings, Bexhill, Eastbourne, Brighton, Worthing and Bognor. Recruitment started on September 9th and within two days 1100 men from all walks of life had volunteered. They became the 11th Battalion, and the first South Down Battalion, nicknamed Lowther’s Lambs.  When the gardeners in The Buttonmaker’s Daughter lay down their tools and walk to Worthing together to enlist, it’s a Pals Battalion I imagine them joining. 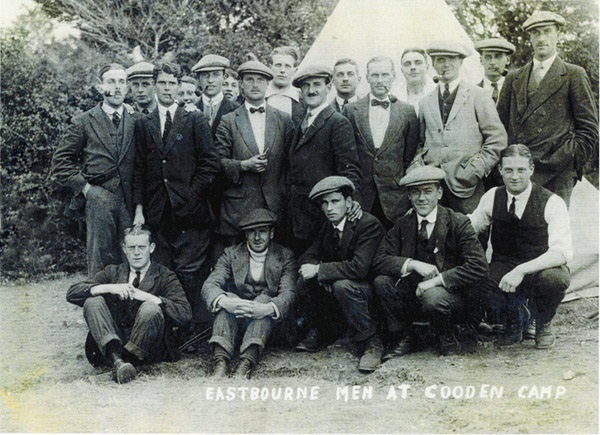 The scale of the response to Kitchener’s call for volunteers was astounding, with around 30,000 men enlisting every day and by mid-September 500,000 men had volunteered. Another 500,000 had joined them by the end of the year. There were several reasons why so many rushed to enlist. A surge of patriotism certainly, fuelled by tall tales of German atrocities and a desire to help a ‘little’ country like Belgium. But most people believed, too, that the war would be relatively short, and in the meantime joining the army promised an opportunity for travel and excitement that was absent from most British lives at the time.

In addition, for many in the industrial heartlands of the country, the army promised a break from the grinding poverty of everyday life. It meant regular pay (one shilling a day for privates) as well as proper food and clothing, not to mention barracks that were likely to compare favourably with their normal living conditions. Many would-be volunteers, though, were rejected on medical grounds, suffering from the cumulative effects of poor diet, medicine and housing. 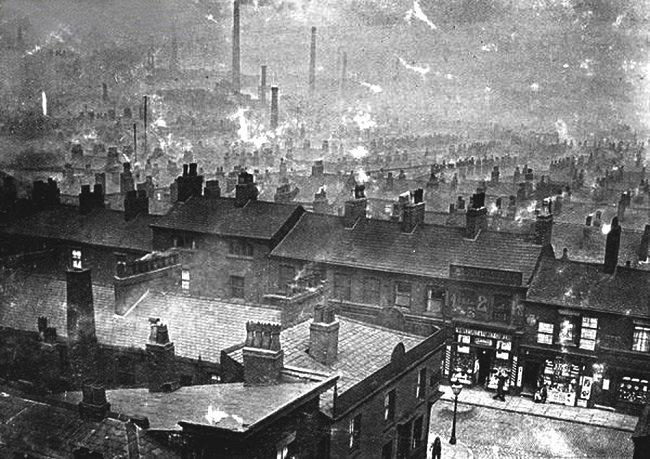 As Christmas passed and casualties rose, the initial euphoria faded and military service became as much a duty as an opportunity. Recruitment continued throughout 1915, but it was bolstered by social and peer pressure rather than enthusiasm.

The Pals Battalions spent 1914 and 1915 training in Britain. The Somme in July the following year was the first major battle for most volunteers and for many, it was to be their last. A major offensive was intended to relieve the pressure on the French at Verdun, breach German lines and force an early victory. But the first day of the Somme was disastrous. The preceding artillery barrage had failed to destroy the heavily fortified German trenches and military commanders, concerned with maintaining discipline in their new volunteer army, instructed them to walk in formation towards German lines when the attack began. In doing so, they walked into a slaughterhouse. 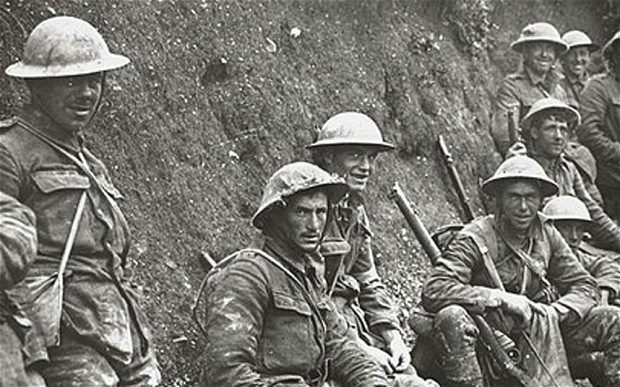 The Battle of the Somme claimed the lives of many Pals Battalions, including 250 of the Accrington Pals within the first twenty minutes of fighting

The 1 July, 2016 marked the army’s greatest single loss in its history, with 60,000 casualties, of which 20,000 were dead. The Pals Battalions suffered accordingly: of the 720 Accrington Pals who participated, 584 were killed, wounded or missing in the attack. The Leeds Pals lost around 750 of the 900 participants and both the Grimsby Chums and the Sheffield City Battalion lost around half of their men. 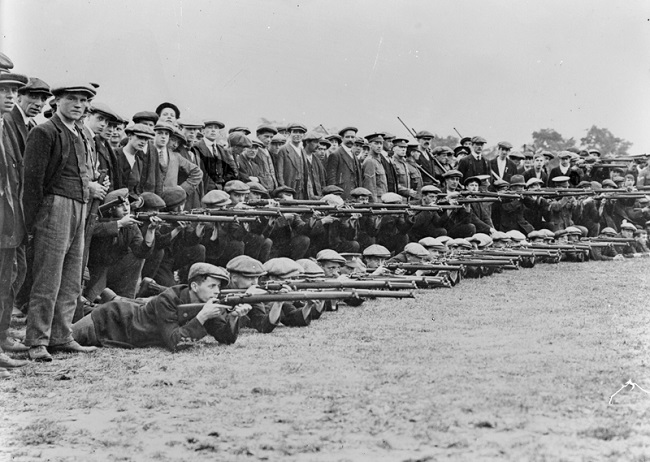 In the Accrington Observer and Times, initial accounts of success quickly gave way to pages filled with names and photographs of those killed, missing and wounded. Percy Holmes, the brother of a Pal, recalled: I remember when the news came through to Accrington that the Pals had been wiped out. I don’t think there was a street in Accrington and district that didn’t have their blinds drawn, and the bell at Christ Church tolled all the day. 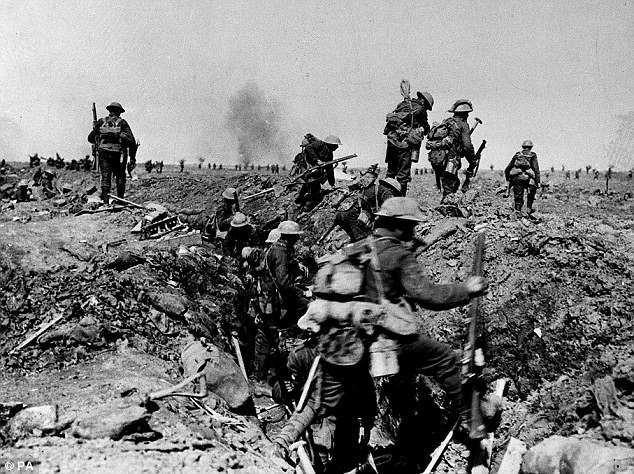 Over the intervening years, the Somme has come to symbolise the true horror of warfare.

The day before the Somme battle, Lowther’s Lambs were involved in a diversionary attack. They went over the top at Richebourg and lost 365 men killed or missing and over 1000 wounded. In August, they moved down to the Somme itself and suffered terrible casualties at Beaumont Hamel, then on November 17th  on to the infamous mud of the Ypres salient where they took part in the battle of Passchendaele. By the end of 1917, there were very few of the original ‘Lambs’ left. None of the fictional gardeners of The Buttonmaker’s Daughter returned to Summerhayes.

The Pals Battalions survived the Somme in name only. Some, like the Sheffield Pals, were disbanded altogether before the war ended. Other groups were diluted by the influx of men to replace those who had died. By early 1916 around two million men had enlisted voluntarily, but early enthusiasm had declined and conscription was introduced in March of that year.