Nursing in the Second World War

Nursing in the Second World War

Anyone wishing to train as a nurse at this time applied to a nursing school attached to a hospital and worked on the wards as an apprentice. Recruits were generally between 21 and 30 years old (at 21 a girl was considered able to cope with the naked bodies of strangers), and the ideal candidate was mature and reliable, someone who would fit easily into the hospital – an educated middle-class girl perhaps, or a girl with the manners of a superior domestic servant. This is one of the reasons that Daisy in The Nurse’s War experiences little difficulty with her superiors. As a former personal maid, she is used to working for ‘ladies’ such as the Sisters at St Barts.

It was a three year training and pay was a pittance. Quite often the uniform had to be paid for out of the meagre salary. In addition, the hours were long and the work hard. During a preliminary year, student nurses had a day off a month plus half a day every other Sunday, but if the nurse was on a ward that was busy, she might not get her free time. Off duty she had to be back in the Nurses’ Home by 10.30 pm, though occasionally she could ask for a late pass until 1.30 am. 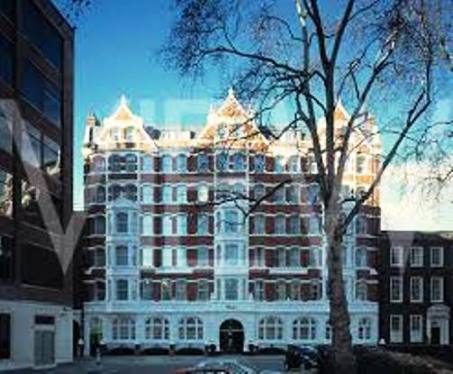 In wartime food was short and nurses suffered along with the rest of the population. Their rations were heavy in carbohydrates: at lunchtime and mid-morning, for example, coffee or tea was available with wedges of bread and dripping. It could be a bone of contention that serving soldiers were allocated more calories than nurses, even though they might only be guarding the hospital and not engaged in physical labour. Often there was little time to eat anyway and nurses would regularly miss meals. Food, or lack of it, features quite prominently in The Nurse’s War. The roast pheasant that Daisy is forced to forgo during her evening at the Ritz remains a tantalising dream.

In the preliminary year training included the teaching of anatomy, physiology and hygiene, along with a drilling in the basic skills of bedmaking, damp dusting, scrubbing the rubber sheets that covered mattresses, sluicing foul linen and preparing special diets. At the end of the first year an examination had to be passed in order for the student nurse to continue. 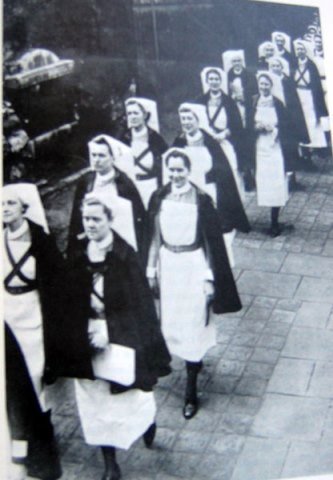 The capes of St Bart’s

A nurse’s life was subject to a plethora of rules, all of them strictly enforced – not a single hair was to escape the starched cap, there was to be no sitting on patients’ beds, no eating, no accepting presents, not even a single sweet. And everything must run like clockwork. When the ward sister walked in to read prayers at 8 a.m, the ward had to be perfect. Every patient would have been washed, eaten breakfast, had their bed made, their locker tidied, and the dusting would be finished and the floor spotlessly clean.

In the first months of the Second World War, the expectation of immediate bombing was not fulfilled. The ‘Phoney War’, as it was called, lasted between 3 September, 1939 and 10 May, 1940, when German troops marched into Belgium, the Netherlands and Luxembourg. Despite the lull, plans to evacuate London hospitals still went ahead. London was divided into ten sectors, each based on a central London hospital. Each hospital had a hinterland spreading into the adjoining countryside. The plan was for city centres to operate as casualty clearing stations when the bombing began. Victims would receive initial treatment in the city, but once their condition stabilised they would be evacuated to ‘base hospitals’ in rural parts of the sector. 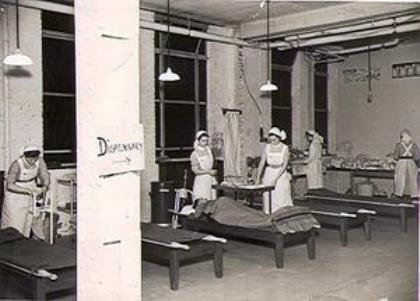 Nurses at work in a casualty receiving station, 1939

During the weekend of 2 September to 3 September, 1939, city centre hospitals moved all but their most immobile patients out of town and into the country, using fleets of specially adapted Green Line Buses. These made huge ambulances with lots of room for stretchers. Doctors and nurses followed shortly afterwards, leaving only a skeleton staff in London. Nurses had often to travel up and down to the country hospitals accompanying their patients. Daisy, and her friend Connie, in The Nurse’s War, are part of the skeleton staff at St Bart’s, but frequently make the journey from their city base to Hill End hospital, near St Albans.

At the same time as patients were shipped out, wards were closed in the mother hospital, operating theatres moved to the basement and outpatient services suspended. Medicines, bandages and other equipment were stockpiled and nurses received extra training in dealing with wounds and burns. But the plans had to be rethought when the expected bombing never materialised. Half the people brought into Casualty during the Phoney War were suffering injuries because of the blackout, from falling or from banging into lamp posts. By the spring of 1940, outpatient departments had reopened.

Many of the country hospitals that were used had been mental institutions and had little equipment. Initially nurses were sent to scour the locality to buy bowls, instruments and syringes. Supplies eventually came through, but in the meantime nurses had to make do and mend. Accommodation could also be inadequate. Often old buildings had to undergo a rudimentary conversion or prefabricated huts needed to be built in hospital grounds to act as wards, operating theatres and x-ray units, as well as housing for staff. Neither solution was particularly comfortable. 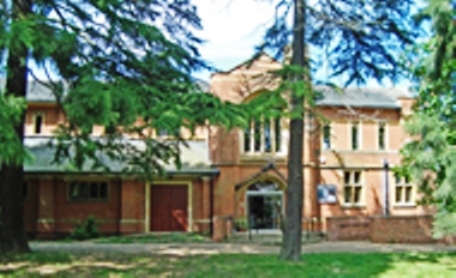 The bombing of British cities began on the 7th September, 1940 and, although no one knew it at the time, this was the beginning of the Blitz. London itself suffered fifty-seven consecutive nights of air raids. Minor injuries were dealt with at first aid posts, but victims with broken limbs, severe lacerations and concussion from falling masonry, began to trickle into hospitals around an hour after each raid began. As civil defence teams dug people from beneath the rubble, the trickle became a stream and then very quickly, a river. Wards were bedlam. Blood-stained nurses and doctors had to work at great speed and for hours on end, until they were near to collapse. Nurses had never before had to deal with so many and such terrible injuries: whole legs smashed, backs full of broken shards of glass, crushed hands and feet.

Some of the London hospitals received direct hits. St Barts’ was bombed six times, but miraculously no one was killed. When the air raid warning sounded, mobile patients had to be walked down to the basement and the bed-bound pushed along an underground corridor. When the all-clear sounded they were pushed back up again. Any nurse off duty when the siren went had to get back to the hospital as soon as she could. 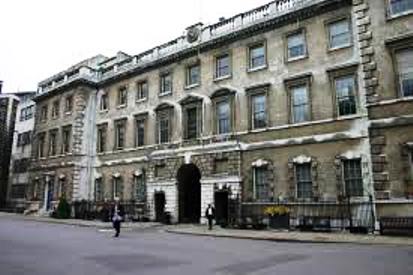 The nursing profession was all female at this time and no training existed for male nurses until some time after the war. (Female medical students were absent, too, while hospital porters and orderlies were generally recruited from conscientious objectors). This was an age in which effective nursing could mean the difference between life and death. Research into anti-bacterial medication had begun before war broke out, but was still in an experimental stage. From 1940 penicillin became available, though for some years it was restricted to research patients who were likely to die. In this situation good nursing was often the key to survival. 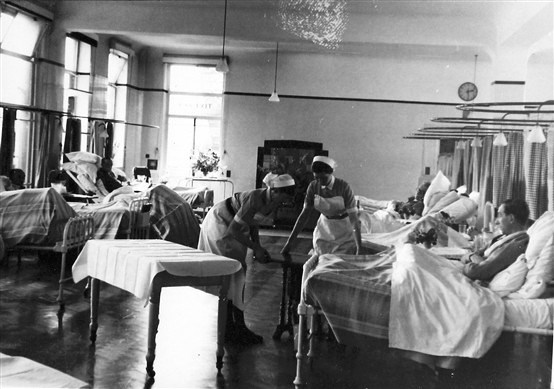