Men’s and women’s roles became more sharply defined during the Victorian period than arguably at any time in history. In earlier centuries it was usual for women to work alongside husbands and brothers in the family business, but as the nineteenth century progressed, middle-class men increasingly commuted to their place of work – the factory, shop or office – and their wives, daughters and sisters were left at home to oversee domestic duties. The two sexes came to inhabit completely different spheres, meeting together only at breakfast and dinner. 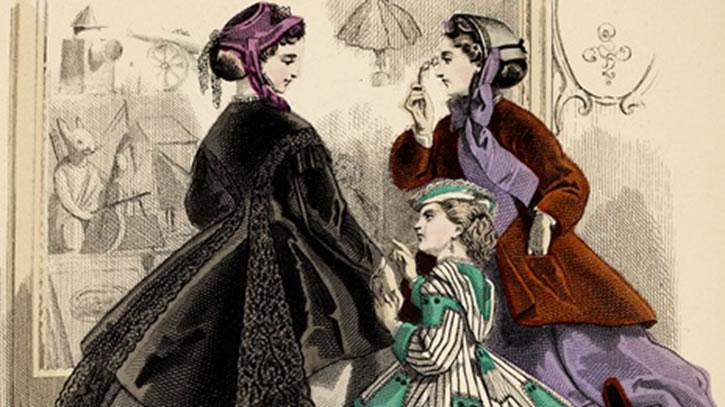 From the 1830s, women started to adopt the crinoline, a huge bell-shaped skirt that made it virtually impossible to engage in domestic work, which was deputed to an army of servants.

The ideology that supported this gender separation saw women having different ‘natural’ charcteristics to men. Women’s nature was seen as passive while men’s was active. Women were considered physically weaker and therefore best suited to staying at home. In addition, they were morally superior to men. It was their duty to provide a counter to the moral taint their menfolk incurred by labouring all day in the public sphere. And their duty to prepare the next generation to continue the same way of life.

Women, such as Alessia Renville in House of Glass, occupied an unhappy position in mid-Victorian society. They were poorly educated and barred from any form of higher education. Society considered it unfeminine to devote time to intellectual pursuits in case it usurped men’s ‘natural’ intellectual superiority. Some doctors reported that too much study had a damaging effect on the ovaries, turning attractive young women into dried-up prunes. Instead of intellectual study, therefore, women were coached in ‘accomplishments’ – painting, music, a smattering of foreign languages perhaps.

The home was their world since they were excluded entirely from public life: barred from universities, from following a profession and from voting in any election. If they were forced to work due to adverse family circumstances, the job would be low status and ill paid. Being a governess was one of the few posts a middle-class girl could take and she would only do so in extreme circumstances, for the salary was meagre and her treatment often unkind. Working-class women, of course, had a very different experience. They began work around ten years old, often in domestic service, or working as factory operatives or agricultural labourers, and continued to work until they married. If their husband earned sufficient to support them, they would stop – otherwise they worked all their life, taking short breaks to give birth. 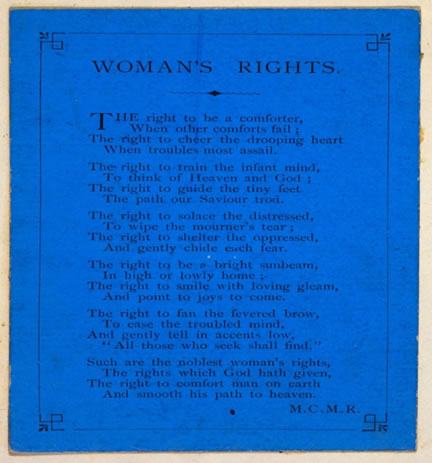 To marry and have children was seen by society as women’s destiny and for all classes marriage remained the main goal of a woman’s life. Single women were pitied and attracted social disapproval, yet in 1850 women outnumbered men by a considerable margin with a third of all women over twenty unmarried. At the same time, a young girl was not expected to focus too obviously on finding a husband. Being ‘forward’ in the company of men suggested sexual appetite at a time when women were assumed to desire marriage because it allowed them to become mothers, rather than enabling them to pursue sexual or emotional satisfaction.

Girls usually married in their early to mid-twenties, with their groom typically five years older. This reinforced the ‘natural’ hierarchy between the sexes and also made good financial sense. A young man needed to be able to show the girl’s father that he earned enough money to support a wife and any future children. 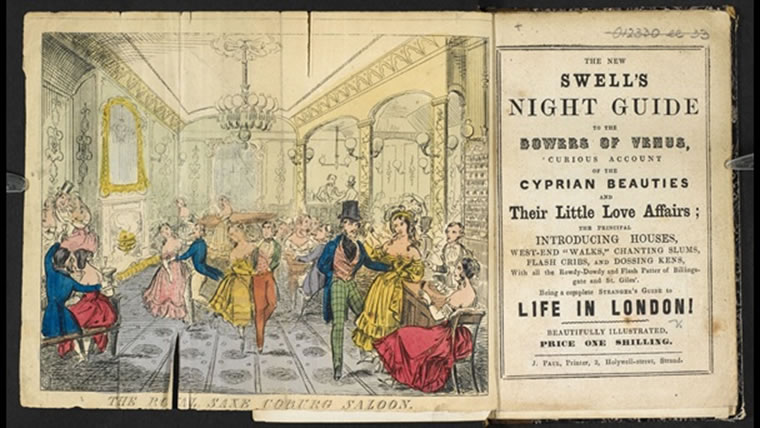 The New Swell’s Night Guide, a guide to finding and approaching actresses and prostitutes, estimated date 1840.

Some young men managed to stay chaste until they married, but plenty resorted to using prostitutes. All the major cities had red light districts where it was easy to find a woman you could pay for sex. Syphilis and other sexual diseases were rife, and many men unwittingly passed on the infection to their wives.  In the marriage service, women promised to ‘obey’ their husbands: legally a man could force his wife to have sex and beat her if she refused. If she tried to run away, the police could return her to her husband. Any children from the marriage were legally his and he could choose to take them away without reason and send them to be raised elsewhere. When Alessia leaves her husband in House of Glass, the stakes are enormous – she knows she risks losing her precious daughters.

It was unlikely that a woman could do anything about the situation if she were unhappy in her marriage. Once married, a woman forfeited whatever small rights she had. In terms of property, everything she owned, inherited or earned passed immediately to her husband. Even if a woman came from a rich family, she would need to have no brothers and remain unmarried in order to live independently, since wealth automatically passed down the male line. The only legal avenue through which married women could reclaim property was widowhood. Marital separation, whether initiated by the husband or wife, usually left the women economically destitute. Divorce was extremely expensive and almost impossible for a woman to obtain, since whatever money she possessed had already passed to her husband. In addition, adultery on the husband’s part was insufficient grounds for a woman to sue for divorce, whereas it was grounds for a man to divorce his wife. Augustus Egg’s Past and Present is a vivid depiction of what was likely to happen to a woman foolish enough to seek pleasure outside the marriage.