The Heyday of Hastings

The Heyday of Hastings 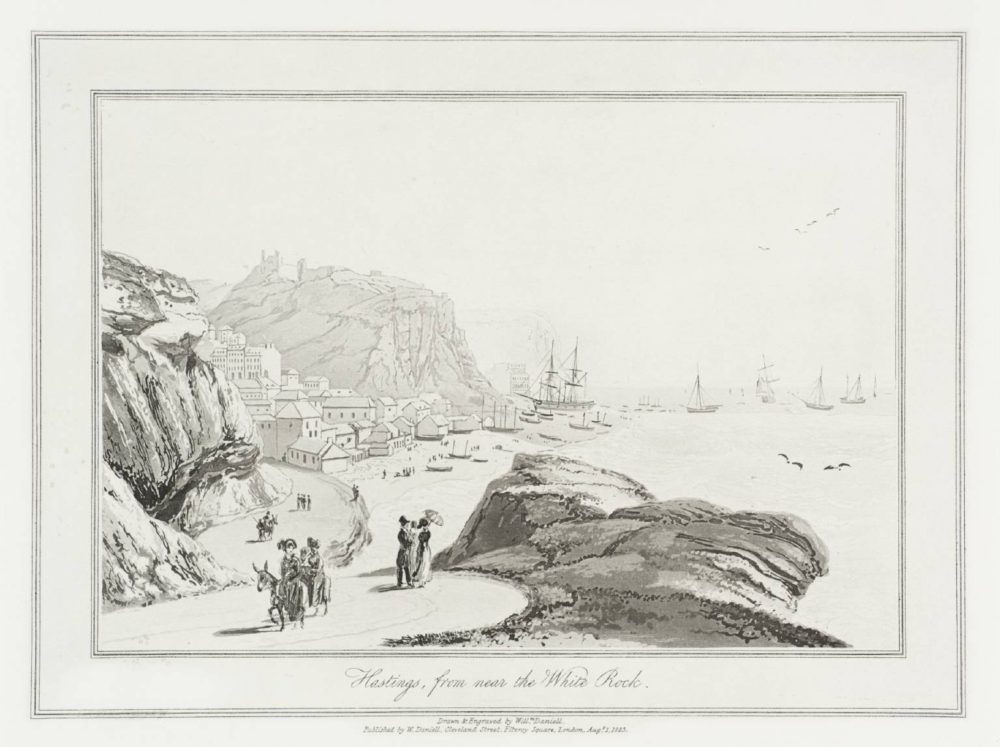 In the early nineteenth century, Hastings was a tiny fishing town. The fishermen were generally very poor and many of them were involved in smuggling in order to make a living, until preventive methods became much fiercer. Gradually, the fishermen found other ways of bolstering their meagre income – they ran whelk, oyster and cockle stalls, picked hops, sold flowers and offered boat rides. Livelihoods became a good deal easier when the town grew in wealth from around 1820. At this time, Hastings became a resort second only to Brighton in reputation, and between them the two towns housed two thirds of the urban population of Sussex. Wellington Square was built in 1817 and with Pelham Place and Pelham Crescent, built in the 1820s, provided the purpose- built lodgings that made Hastings an elite resort. 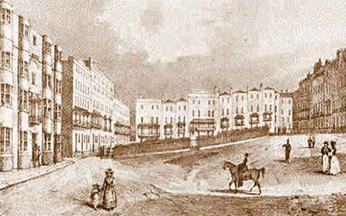 The gentrification of the town was hastened by the Napoleonic wars and subsequent naval blockades, since they made holidaying on the Continent impossible for the rich. Alternative watering places were sought and Britain’s coastline discovered. Wealthy invalids and society figures found the sea delightful and hastened to Hastings to be cured and to be seen. 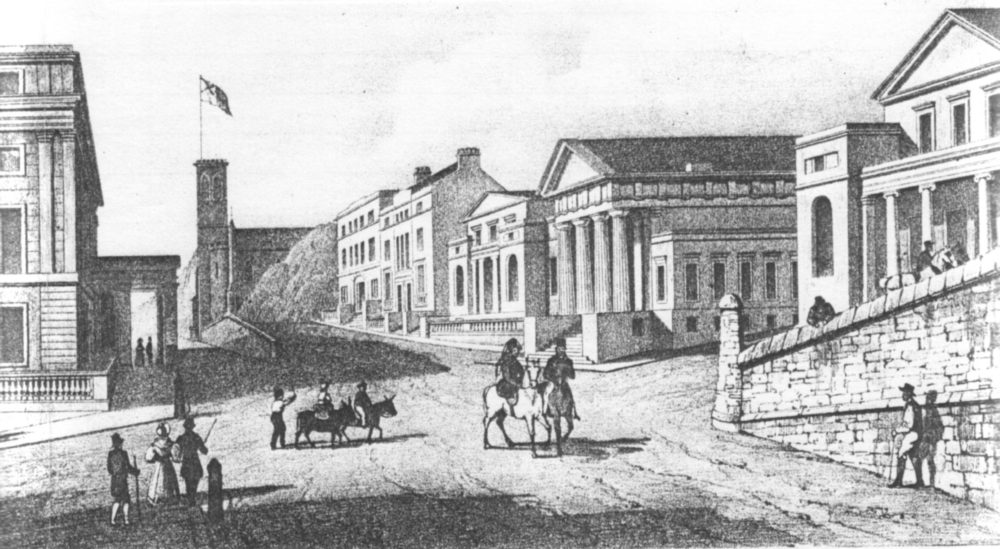 The Assembly Rooms built in 1829 by James Burton

Inland spas had long been popular but now journeys were made from coastal resort to coastal resort, with sea water a substitute for spring water. The latest bathing machines and water-dipping paraphernalia were installed for those seeking a cure. Other social requirements were also met – visitors wanted beautiful scenery, excellent shopping, social events, reading rooms and libraries, bookshops, coffee houses and clubs and societies of interest. 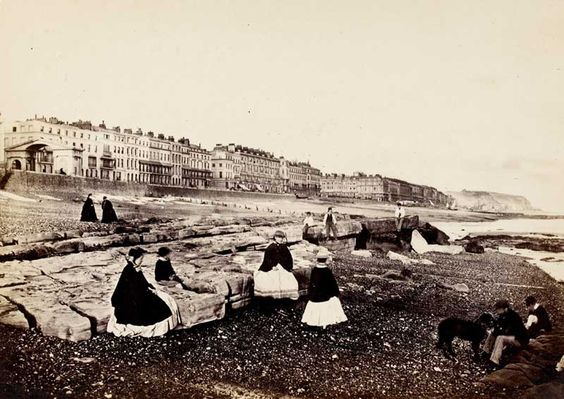 The middle classes at play

Since the middle of the eighteenth century, Hastings had attracted artists and poets who loved its gentle coastal walks and spectacular scenery. Once the town offered a similiar experience to that of inland spas, the number of eminent visitors increased. Byron and Keats were among them, as well as Dante Gabriel Rosetti, who features in House of Lies.

Rossetti knew Hastings as a child. In 1843 his parents took lodgings in High Street, hoping to help their son recover from bronchitis. After that, he seems to have visited frequently and brought others with him – John Everard Millais and William Holman Hunt, with Rossetti’s younger brother, visited in 1852. And, of course, two years later Lizzie Siddal and Rossetti came to Hastings together. 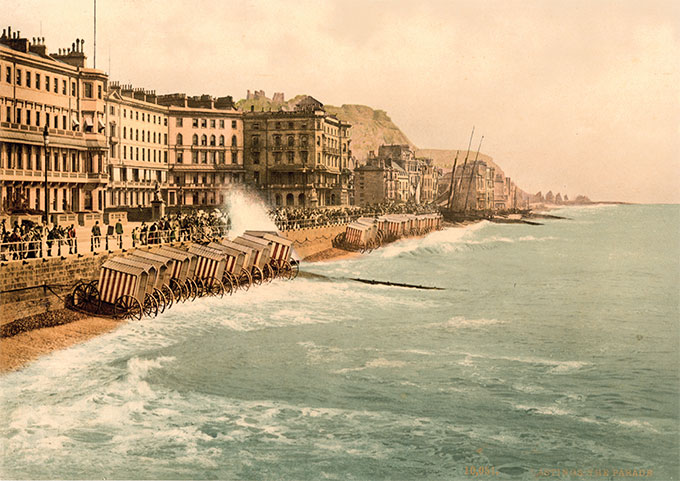 The London, Brighton and South Coast railway reached West Marina in 1845, although it was not until 1852 that the station later named St Leonard’s Warrior Square was opened by the South Eastern Railway. The coming of the railway meant a much easier journey than by stagecoach or sea – in 1854 the journey from London Bridge Station took just over three and a half hours and cost £1 return. Ease of travel meant a boom in the number of  ‘day trippers’ and a swelling of the permanent population. Large terraces of grand Victorian properties were built to accommodate them. 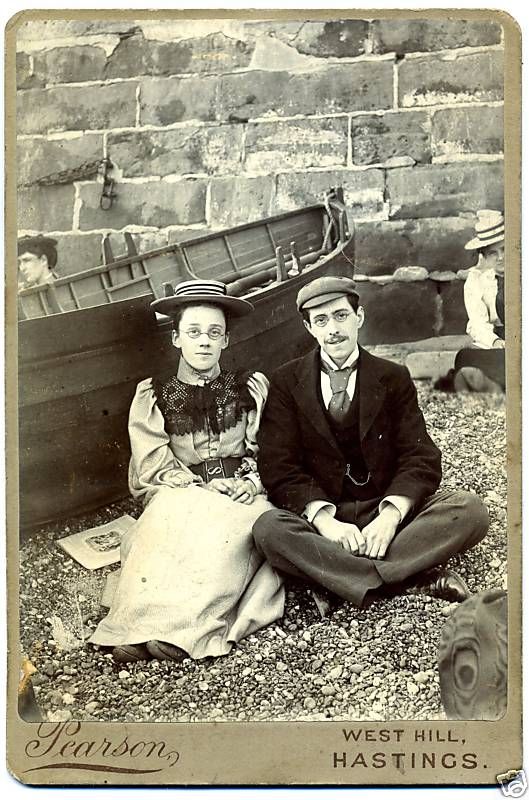 At the far eastern end of the seafront is a shingle beach that housed the fish market. Boats landed their catch daily (and still do) to sell their wares at the fish auction. Boats were stored on a  beach dotted with net-huts and store-houses. The three-storied net huts, black-tarred and gaunt, were built on pebbles and are unique to Hastings. 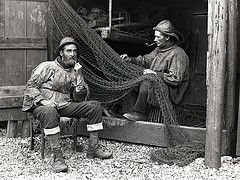 Mending the nets in the Victorian period.

The net huts were used for drying fishing nets to prevent rotting. Nowadays the nets are made of nylon and can be left outside, so the huts are used for other storage. They were built tall because of the limited space at the head of the beach during Victorian times when the sea was somewhat closer, and possibly also to avoid paying excess ground tax. 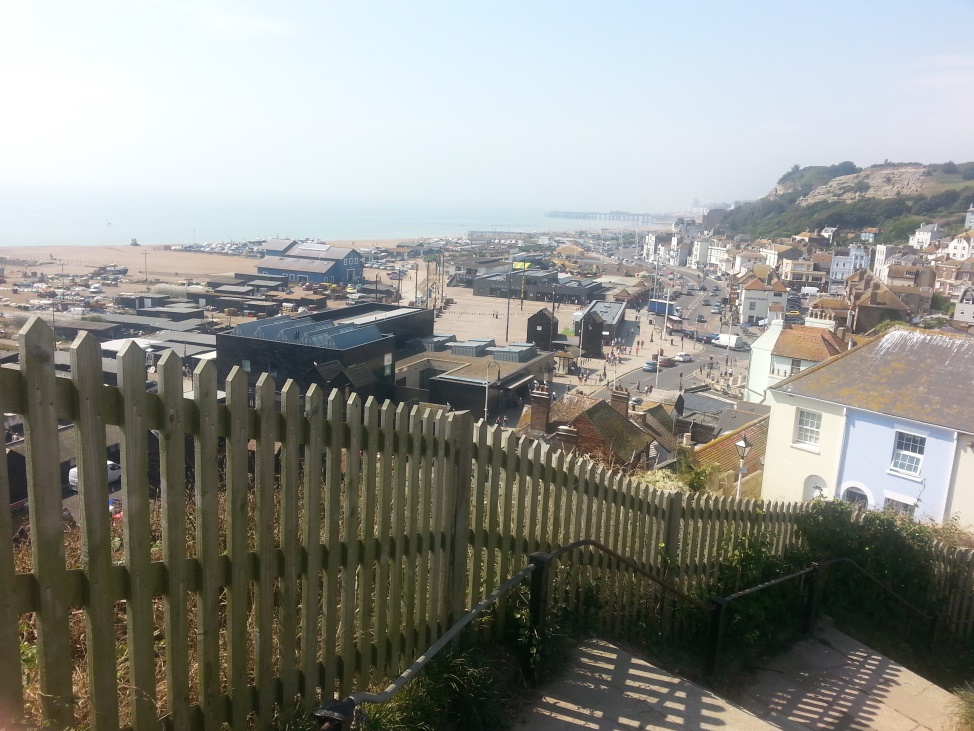 The old town itself nestles in a long, narrow valley flanked by East and West Hills that look down towards the sea. There is a steep gradient from High Street up several roads and paths which take the visitor to the top of the sandstone cliffs. High Street and All Saints Street, are very much as they were in the Victorian era. Megan, the modern day heroine of House of Lies, is struck at how little the townscape has changed since the nineteenth century. 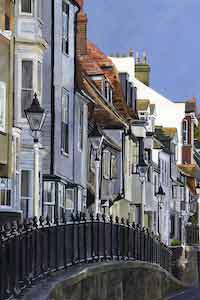 All Saints Street, Hastings Old Town, with its raised pavement and timber-framed buildings.

This article is based on research undertaken for my novel, House of Lies.