The British in India

The British in India

It has been said that the British Empire was picked up in a ‘fit of absence of mind’. The speaker may well have been thinking of India, the country coming gradually under British rule, not by the efforts of Britain’s government but by those of the British East India Company, founded in 1599 by a group of merchants in search of ‘quiet trade’. 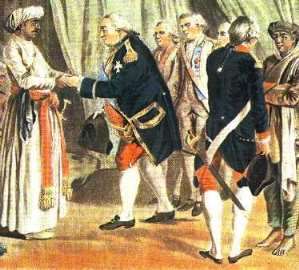 The original traders of the East India Company

Circumstances, however, put paid to these peaceful intentions, and over the next two hundred and fifty years the British found themselves more and more in the role of conquerors and governors than traders.

By the eighteenth century the presence of the East India Company was leading to growing unrest among Indians. Under the company’s aegis, a large number of Christian missionaries had arrived in India and their preaching of Christianity was resented by Hindus and Moslems alike. In addition, the introduction of modern technology, especially railways, to facilitate trade was clashing with the country’s traditional, slower paced culture and economy. Things came to a head with the Indian Mutiny in 1857, a serious revolt sparked by rumour, that cost very many lives, both Indian and British. The rebellion was eventually put down but it led the British government to assume direct control over India and dissolve the British East India Company the following year. Britain instituted reforms, including tolerance of religion and the recruitment of Indians into the civil service, in the hope that further rebellion would be avoided. But at the same time, they strengthened the British military presence. Historians have noted that the British government may never have intended to take control of India, but when British interests were threatened, the government stepped in. 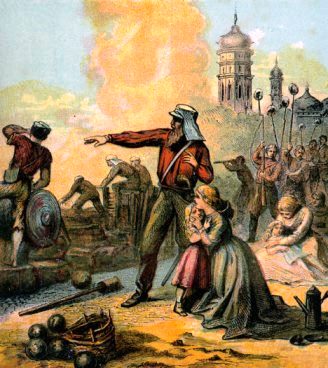 Contemporary illustration of The Indian Mutiny, 1857

For the next ninety years, British rule would prevail, with Britain ruling sixty percent of Indians directly and the other forty percent indirectly through native princes who swore allegiance to the British crown. British rule in India became known as The Raj, a name derived from the Sanskrit term raja meaning king. The term did not have official meaning until after 1858, but it was in popular usage many years before. Over the next century, many other Indian words came into the English language: bungalow, bangle, dungaree, khaki, pundit, seersucker, jodhpurs, cushy, pyjamas to mention just a few.

The centre of British life in the Raj was the civil station or military cantonment. It provided housing, work and social life. Bungalows occupied by Europeans were often in walled compounds or in the case of the military in the ‘civil lines’ of the cantonments. These had to be situated at least half a mile from any Indian home and were built upwind to avoid smells and the fear of infection from Indian towns and villages. Civil stations and cantonments were laid out with wide roads and sizeable gardens. The bungalows enjoyed spacious, airy rooms with high ceilings and whitewashed walls, and a wide veranda which encircled the entire building. In contrast, Daisy’s first Indian home in The Girl from Cobb Street is small, hot and very isolated, a perfect setting for the bad deeds of the novel.

Houses were built facing the north-east in an attempt to remain cool in hot weather. The hot season, which could last up to five months, began in April and temperatures could soar to 130 degrees Fahrenheit in the shade. Bungalows were made from a timber framework which was covered in reed rushes and earth, and plastered together with cow dung then whitewashed. Wallpaper was pointless since white ants would have eaten it and floors were made of beaten mud – termites love wood – and covered with bamboo or rush matting. Beds were draped with mosquito nets. Thick mats woven from fragrant grasses called ‘tatties’ hung in doorways and windows and in the hot season, every once in a while, a man servant would throw a bucket of water over them. Then when the breeze blew through the house, it became cool and sweet smelling. Most furniture was basic, made mainly of bamboo with cushions for a little comfort. It was usual to hire furniture, particularly if a young officer was just starting out and was short of money. Piped water was often available but electricity was rare. Before electricity arrived, lighting would have been from paraffin or coconut oil lamps. Each bedroom had a bathroom leading off it and before piped water, had a hole in the wall through which water drained when tipped out of the bath. By the 1930s, though, there was running water and flush lavatories, but before that a ‘thunderbox’ was in use.

The only Indians in the compound were servants who had their quarters at a distance from the house. There was a constant fear of disease and servants were often see as having low standards of hygiene and of causing potentially fatal ailments such as diarrhoea, dysentery and cholera, by their handling of food. Milk and water had to be boiled and stored carefully. Fruit was peeled. Vegetables had to be washed in permanganate of potash, or ‘pinki pani’ as it was called. Cholera, spread by polluted water, was endemic during the whole of the Raj and afterwards. It could strike with terrifying speed and kill within a few hours. 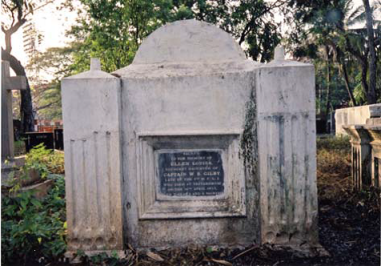 Children were particularly vulnerable and their pathetic gravestones scattered across India is a testament to this. A sick child could sometimes be followed to the grave by every one of his siblings. Because of the ravages of climate, burial was immediate, within twelve hours of death.

Most European families had an army of servants. A cook, ayahs for the children, a jemader who belonged to the lowest caste and came in daily to sweep and wash floors and keep the bathrooms and toilets clean, a mali who looked after the garden, a syce who chauffeured the family around and a durzi, an Indian dressmaker, who could copy any picture given him and came equipped with needles and thread and his own Singer sewing machine. In the evening, the bheesti came with his goat skin bag and went round the bungalow sprinkling water into the dust. There was naturally no air conditioning and a punkah wallah might be employed to pull on a string attached to a heavy length of cloth suspended on a beam across the ceiling, and swing it to and fro to fan the sweltering occupants. The rope ran through the window to the man who pulled it, often lying on his back on the veranda, sometimes with the string attached to his big toe. 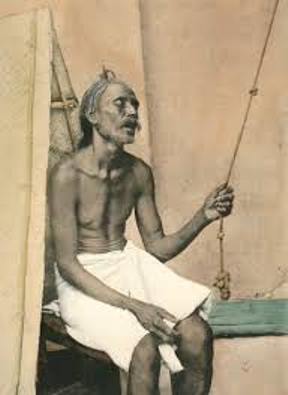 Memsahibs were the most travelled of the family since they were constantly migrating between Britain and India if family finances allowed. A P and O service carrying officers and civilians left Southampton for Bombay every week. Affluent seasoned travellers avoided the worst of the sun by travelling port outward and starboard home – hence the arrival into the English language of another Indian based word, POSH. Husbands stayed put in India except for any long vacations, but these could be at five year intervals or more. The women travelled to be with their children, who had been sent back at an early age to boarding school in England. Seaside towns such as Eastbourne were popular, having good schools and a healthy climate, and the advantage of being a pleasant resort for families on holiday and for retirees. 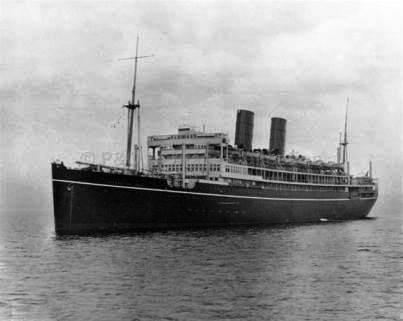 The Viceroy of India, 1929 – the ship that takes Daisy Driscoll to India

In the 1930s one of the first social functions for the newcomer to India was to drop their visiting card on British residents in the area. A small black box sat outside every front door, and anyone who was a newcomer or who wished to make contact could drop in their visiting card giving details of who they were and why they had called. The Club was the centre of social life in civil and military stations. If you didn’t belong, you were an outcast. It was presided over by senior officials such as the Collector, the District Superintendent of Police, the District Forest Officer and so on. Army officers swelled the list of members and the Club provided a meeting place between the civil and military authorities. Indians were not allowed to be members and neither were Anglo-Indians. Activities included dancing, talking, reading the papers and playing cards. There might also be a billiard room or a bridge room and a dining room. The bar was a male preserve where women were not allowed. The women were usually accorded a special annexe, nicknamed the hen-house. Daisy finds her first visit to the Club in The Girl from Cobb Street an endurance test: there are so many ‘rules’ to know and follow, and the memsahibs are frankly terrifying. 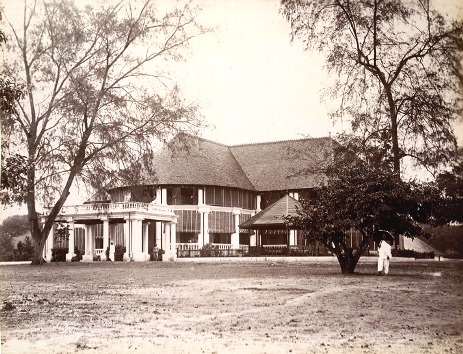 The Club veranda was the favoured social spot. It was a long, deep area, cool and in the shade, and fitted out with cane chairs and tables. Conversation was trivial, the men talking shop and the women discussing servants and children. Personal gossip was kept to intimate dinner parties. Talking about women was frowned upon, except in the hot season when they had left for the hills (though by the 1930s more women were staying behind on the plains). Sport was almost a religion, a way for Army officers to keep fit and prepare mentally and physically for war and the Club was the centre of sporting activity. Afternoons in the cool season saw polo played, at least three or four chukkas, then a change of clothes and a welcome drink. The first drink of the day could be enjoyed at six o’clock, sundown. There was very little wine on offer. Spirits, mainly whisky and gin, were the tipples of choice. Whisky would be diluted with soda and gin with lime. Inevitably it was a crime to drink too much in front of the servants.

Both the Army and the ICS, the Indian Civil Service, were hierarchical in nature. The rule of precedence dictated who called on whom and who sat next to whom. Junior members took their lead from the top and when they reached the same exalted position, they behaved in exactly the same fashion 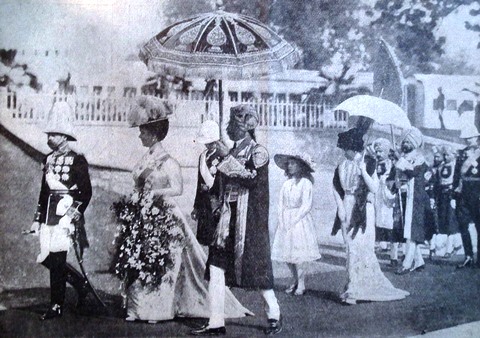 King George V and Queen Mary visiting as Emperor and Empress of India in 1911, a study of precedence in action

Indians did not mock the British insistence on hierarchy since they were very aware of it in their own lives. But once the Raj became a formalised entity, an impassable gulf grew up between the races. Indians were regularly snubbed although they were often sophisticated, intelligent and well-educated. Eurasians, too, were considered socially inferior. They moved in a parallel word, living and working alongside the British but never of them. An Anglo-Indian man could never rise to the top of the ICS or become an officer in the British or Indian army. The Indians, in turn, despised them for being casteless. It was a recipe for violent change and by the 1930s most ICS officers, and perhaps many of the military, had realised that sooner or later, Indian independence was inevitable.