So why an article on Highgate Cemetery amid all the Second World War and Indian material in Behind the Scenes? Simply that the place features heavily in the second book of the Daisy’s War trilogy. The oldest part of the cemetery was a place I visited several years ago and it left a profound impression on me, so much so that towards the denouement of The Nurse’s War, Daisy finds herself a prisoner in one of its mausoleums and with no obvious escape route!

The cemetery in its original form – the north western wooded area – was consecrated on 20 May 1839, by Charles Blomfield, the Bishop of London. 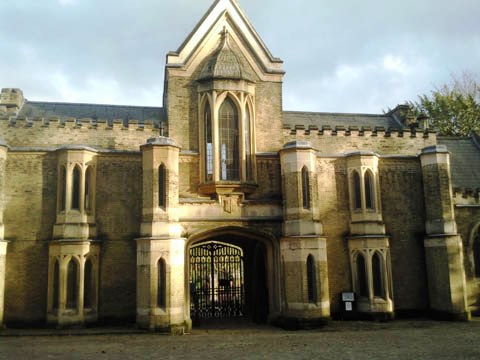 It was part of a plan to provide seven large modern cemeteries to ring the city of London. Inner-city cemeteries tended to be graveyards attached to individual churches, and for many years they had been unable to cope with the rising number of burials. In the early 1800s London had a population of around one million inhabitants, but within thirty years this had almost doubled and so, too, had the number of deaths. Very little new burial space had been put aside to cater for this huge increase: bodies were wrapped in cheap material and buried amongst other human remains in graves just a few feet deep. Quicklime was often thrown over the body to help speed decomposition, so that within a few months the grave could be used again. Graveyards were overcrowded and neglected. By the early 1830s, the authorities knew that for public health reasons, they must act. 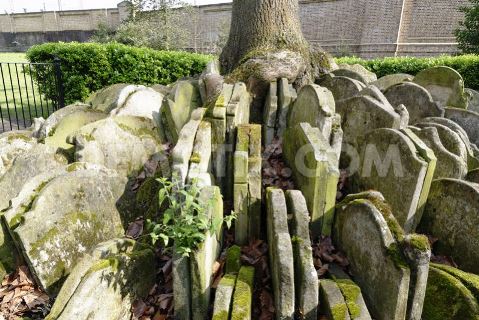 Churchyard of St Pancras Old Church, in the parish of St Pancras, stretching from close to Oxford Street almost to Highgate

At its establishment, fifteen acres of Highgate Cemetery were consecrated for the use of the Church of England and two acres set aside for Dissenters. The right to be buried there was sold for either a limited period or in perpetuity. The first burial took place on the 26th May of Elizabeth Jackson, a 36 year old spinster from Soho.

The cemetery is situated slightly downhill from the top of Highgate Hill and occupies a beautiful south-facing setting next to Waterlow Park. It’s difficult to imagine now but it was once a wide open space with very little greenery. In fact Beatrix Potter, whose fiancé is buried there, once commented that I watered his grave with my tears and yet nothing grew. Highgate is barren to nature. But perched high above the smoke and dirt of the city, the cemetery was much admired and visited, and soon became a fashionable place for burials. It was established as a private business and the cost of burial was considerable. But for Victorians, who lived with death on a daily basis, it was something to aspire to. An expensive ceremony was an opportunity to accord the dead person respect. 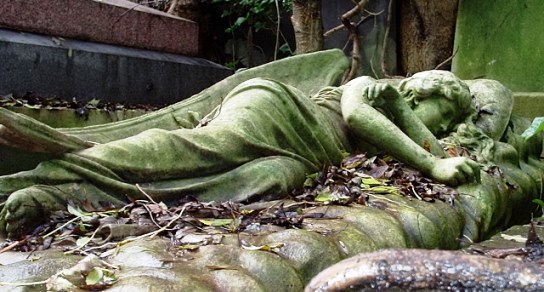 It was also an opportunity to display wealth and status. The flurry of elaborate tombs and Gothic mausoleums, the rows of larger than life stone angels spread throughout the cemetery, and the amazing labyrinth of Egyptian sepulchres, pay witness to that. 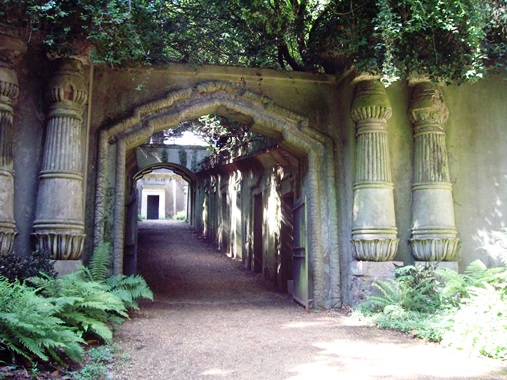 By 1854 the London Cemetery Company was so profitable that the cemetery was extended by a further twenty acres on the other side of Swain’s Lane. This section, now known as the East Cemetery, was opened in 1856. A tunnel beneath Swain’s Lane connected the new ground with the Church of England chapel on the older site. With the aid of an hydraulic lift, coffins would descend into the tunnel and remain on cemetery ground for their passage to the other half of the cemetery.

The East and West sides of the cemetery have a very different feel to each other. The East Cemetery is a pleasantly calm and ordered mix of Victorian and modern statuary. The West section is a wonderfully overgrown maze of ivy-cloaked tombs and shattered urns shrouded in foliage, a haven for birds and small animals, including families of foxes – trees, shrubbery and wildflowers abound. There are some newer tombstones, but most are very old and many uprooted and overgrown with ivy and twisted tree limbs. Shady paths wind past catacombs, mausoleums, and gloomy Gothic monuments. The Circle of Lebanon is one of the most amazing structures I’ve ever seen – a circle of grand tombs presided over by an enormous cedar tree. It was the place where my heroine, Daisy, lost her way in the pitch black of night and almost fell to her death. 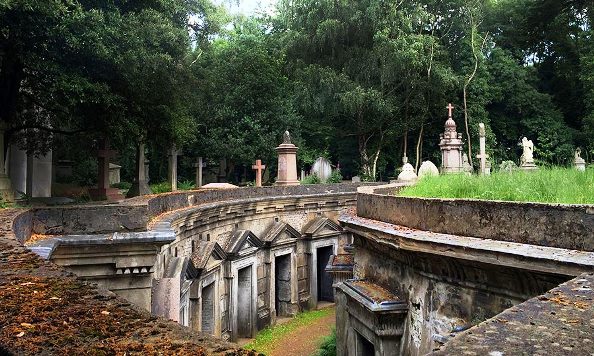 The Circle of Lebanon, West Cemetery

The West Cemetery is a wild and beautiful place, visually stunning but tinged with mystery even on a sunny day. In overcast weather, it would feel decidedly creepy. At night, it would be simply terrifying. As Daisy finds to her cost in The Nurse’s War.

By the turn of the twentieth century the fashion for burials at Highgate was waning. Families no longer wanted such elaborate funerals or such ostentatious memorials. A few wealthy families continued to purchase Rights of Burial into the 1930s, but the cemetery was in terminal decline, with less expensive and more common graves being the main options. Increasingly, greater numbers of graves were abandoned as families died out or moved away, and maintenance became minimal. The London Cemetery Company, who had owned it since 1836, was finally declared bankrupt in 1960 and absorbed into the larger United Cemetery Company. For the next fifteen years there was a struggle to keep the cemetery afloat, but when funds eventually ran out, the gates were closed. 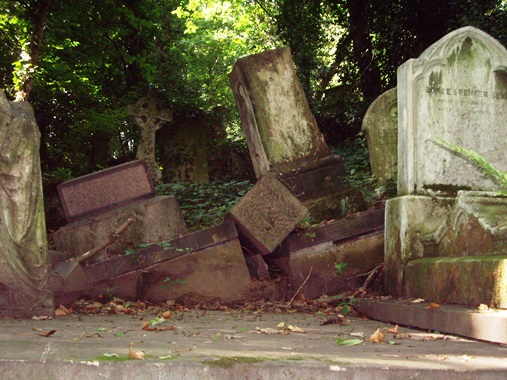 Some of the tombs in the West Cemetery, upended by time and neglect

The future looked bleak until The Friends of Highgate Cemetery was formed in 1975. Its aim was to conserve the monuments, buildings and woodland and to make the cemetery into a public amenity. Work began to clear the overgrown landscape and repair some of the memorials which had been damaged by vandals. Since then an increasing amount of restoration and conservation work has been carried out, balancing the needs of the architecture with the needs of wildlife, for which the cemetery is a refuge within the city. 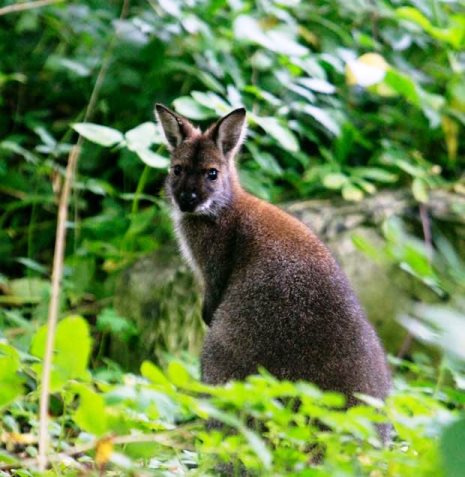 One of the cemetery’s more unusual inhabitants – a wallaby, now captured and rehomed

Today Highgate Cemetery is rightly designated Grade I on the English Heritage Register of Parks and Gardens of Special Historic Interest in England. The cemetery is a living history of Victorian London. Both East and West sections contain the remains of some of the most eminent people of that time – poets, painters, scientists. At least 850 notable people are buried at Highgate including eighteen Royal Academicians, six Lord Mayors of London and forty-eight Fellows of the Royal Society. The West section, for example, contains the graves of Michael Faraday, the scientist, and the artists of the Rossetti family, including Elizabeth Siddal. The East site boasts the monumental tomb of perhaps Highgate’s most famous occupant, Karl Marx, but also contains those of George Eliot, Paul Foot, Patrick Caulfield and Max Wall.

My memories of Highgate Cemetery remain vivid. It is probably the most atmospheric burial ground I have ever visited. A place to encourage creative inspiration, if ever there was. And once I’d been there, I knew that this was where Daisy in The Nurse’s War had to endure her darkest hour – but also her very best. 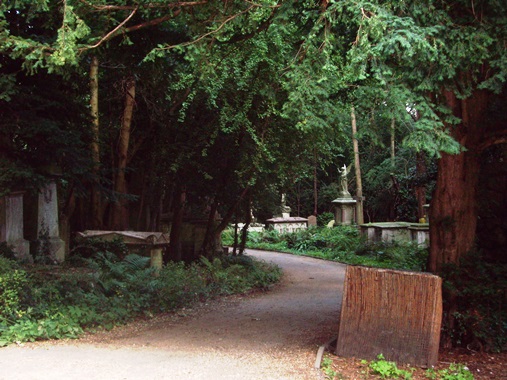 This article is based on research undertaken for my novel, The Nurse’s War